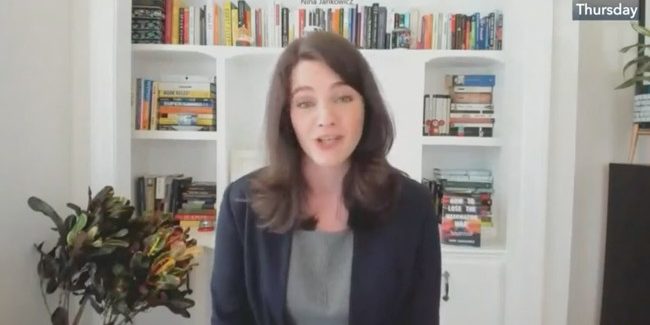 As Townhall has been exposing, the Department of Homeland Security’s new disinformation governance board and its leader Nina Jankowicz are set to be yet another Democrat big government assault on free speech aimed at criminalizing dissent in order to protect their deeply flawed version of reality. Jankowicz is known for her mess of TikTok songs about disinformation online, in addition to her embrace of false claims — literal disinformation — about the veracity of Hunter Biden’s laptop from hell.

It turns out Jankowicz also put many of her wandering thoughts about disinformation and free expression online in a book that, to this writer’s relief, someone else took the time to read.

Christina Pushaw did the Lord’s work in diving into the pages of Nina Jankowicz’s book — How to Be A Woman Online: Surviving Abuse and Harassment, and How to Fight Back — and found in just the first few chapters exactly what you’d expect from someone who the Biden administration has entrusted to begin a federal crackdown on speech deemed inconvenient to its narrative.

Ah yes, the scourge of… mean tweets? To think there needs to be a federal prohibition on criticizing women, and pretty much exclusively liberal women of course, is peak Democrat authoritarianism. Also, the story of Jankowicz’s friend sounds a little familiar… a little bit like Taylor Lorenz maybe?

Of course, Jankowicz has tweeted her support for Lorenz, showing just how deep into the partisan leftist bubble of victimhood generation the woman set to lead a federal board created to squash free expression has embedded herself.

Also, who is the “we” mentioned by Jankowicz?

It’s not a one-off either — Jankowicz apparently has surrounded herself with an entire squad of online ladies who like being able to say whatever they please but bristle when anyone criticizes their arguments or pushes back on their online declarations.

For anyone who misses the irony here, one of Jankowicz’s friends who writes for The New York Times thinks she has been “silenced” as a result of people taking issue with her presumably biased journalism. Criticizing a public figure for one of the country’s largest media outlets is apparently erasure of women? Hardly. What’s more, as Dana Perino once pointed out on The Five, conservative women know they’re not going to get the glowing profiles liberal women do, so they just get their s*** done and ignore the online harassment they take in the meantime.

I guess Americans are just supposed to take her word for it? As Pushaw points out, Jankowicz’s thinking on free expression is the same flawed view held by liberals in education, the mainstream media, and most of big tech: free speech for me but not for thee.

The Biden administration’s ministry of truth, according to assurances delivered by DHS Secretary Alejandro Mayorkas, is going to be an absolutely “neutral” board. But with Jankowicz in charge, Mayorkas’ claim is laughable and little more than disinformation of its own kind.

In addition to her body of cringey work on TikTok and her absurd tweets supporting Taylor Lorenz, her book proves that her fanatic obsession with what she calls disinformation is really just a disposition toward censorship in order to elevate her own thoughts while banning dissent or criticism of her flawed ideas. Now she’s in a federal position set to take her work silencing dissent to new authoritarian levels.