Operation Lone Star Pays Off with Arrests of Illegal Immigrants 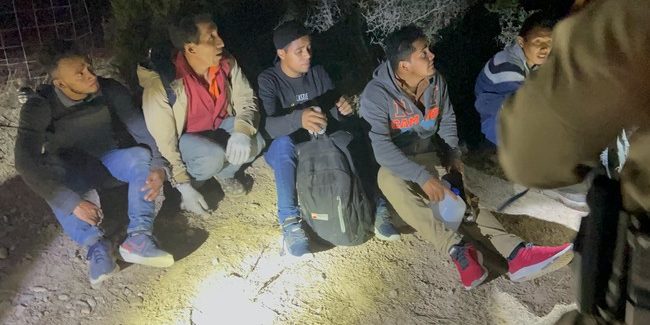 The men arrested — most in their 20s — were in possession of Honduran passports and identification cards from Mexico. They were walking across a private ranch when they were spotted with a DPS drone.

As Townhall witnessed while embedded with Operation Lone Star along the U.S.-Mexico border Sunday night, the men were pursued on foot by soldiers and troopers after being spotted.

They were apprehended, handcuffed and walked to the road before being thoroughly searched for weapons and illicit items. Their backpacks were full of food, additional clothing and toiletry products. One man was carrying a box cutter.

When Townhall asked in Spanish why they came to the U.S., one young man said, “To work.” When asked if they were afraid to be deported, the oldest man in the group spoke up and said he was fearful of being sent back to Honduras, parroting a line often coached by human smugglers to meet the federal government’s low bar of credible fear to make an asylum claim.

After being searched and briefly un-handcuffed, the men were walked to a transportation van. They were handcuffed again and seated inside. They will be charged with criminal trespassing, a misdemeanor, and fingerprinted at the Del Rio processing center.

While DPS cannot charge or pursue federal crimes, prosecuting Texas crimes perpetrated by illegal immigrants has been a main priority for state law enforcement.   The arrests are a result of Operation Lone Star, the partnership between Texas DPS and the National Guard to secure the border with Mexico and cut down on illegal immigration. Since Operation Lone Star was launched in July 2021, after the Biden administration made open border policies and lack of enforcement the federal standard, Texas DPS has made 3,800 arrests on private ranches. Patrols and missions are conducted nightly.