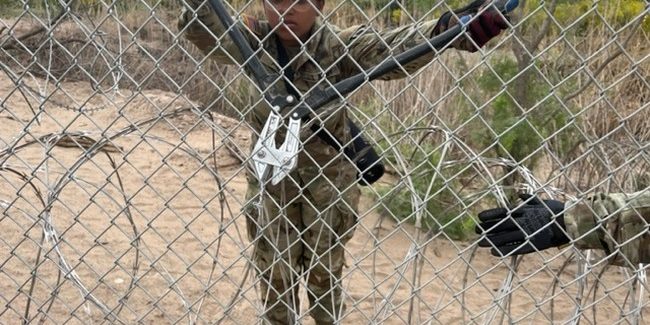 “When you drive a tank through a chainlink fence, if it has concertina wire on top, it’ll stop that tank because that wire will get wrapped up on the sprocket, the wheels of the tank. And I always say that to people because they’re like, ‘Well, anybody can get through this fence.’ And I’m like, well actually, I would be hesitant to drive a tank through it…I usually say that when I’m debating someone on walls or fences or barriers if you will,” Texas National Guard Public Affairs Officer Major Michael Perry told Townhall. “The wall works.”

According to Perry, 80 percent of farmers and ranchers on the border are happy to have walls or fences built on their property to protect their property.

During a visit to Eagle Pass this week, Townhall got a firsthand look at how National Guard soldiers are currently working to protect private ranches and farms from illegal crossings in the Lone Star State.

“The former President [Trump] invested billions of dollars in a border wall that was never going to work or be effective,” Psaki told reporters.

The Trump administration contracted border wall construction from 2016 and beyond. A number of materials – already been paid for with American tax dollars – have been left to rot by Biden administration officials.

In 2006, Democrats and Republicans voted for the Secure Fence Act, which committed to building 700 miles of border wall, fence and other barrier infrastructure along the U.S. southern border with Mexico. The House of Representatives voted 238-138 and Senate 80-19 to pass the legislation, which was signed into law by President George W. Bush. At the time, Democratic Senator Dick Durbin said the legislation didn’t go far enough and that additional border security measures were necessary.

“I would say that that leaves a lot of area uncovered,” Durbin lamented.

“It will authorize some badly needed funding for better fences and better security along our borders that should help stem the tide of illegal immigration in this country,” Obama said.