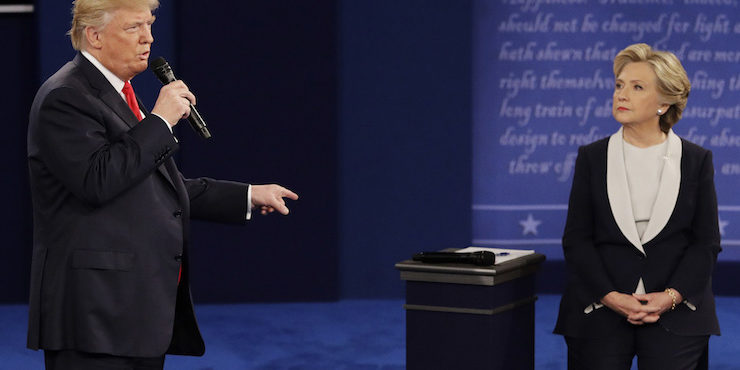 An aggressive Donald Trump, seeking to stabilize his campaign after the release of a decade-old tape where he made lewd comments about women, assailed Hillary Clinton’s honesty and character in an unprecedented way at Sunday’s debate – accusing her of lying about her email scandal, threatening she’d be “in jail” if he were president and suggesting his own comments pale in comparison to her husband’s alleged abuse of women and her treatment of them.

Clinton, in response, claimed Trump’s vulgar comments revealed his true self, while accusing him of trying to create a “diversion” from his “exploding” campaign with his debate-stage attacks.

The exchanges punctuated a freewheeling and raucous debate – the nominees’ second – where the candidates frequently accused each other of distorting the truth. Clinton at times seemed to be trying to take what she described as the “high” road, but a nimble Trump – reminiscent of the pugilistic debater from the GOP primaries – attempted to sideline the controversy over the 2005 tape early on and stayed on offense for much of the 90 minutes in St. Louis.

“She should be ashamed of herself,” the Republican nominee charged, a line he used in reference to both Clinton’s email use as secretary of state and her alleged intimidation of the women who have accused Bill Clinton of sexual assault.

Trump once again apologized for his comments in the newly released 2005 audio in which he talked freely about grabbing women without their consent. But Trump denied he was talking about sexual assault, said he’s never done the things he discussed in the leaked audio – and downplayed it as “locker-room talk.”

“I’m very embarrassed by it, I hate it – but it’s locker-room talk,” Trump said.

He added, “I have great respect for women.”

Trump pivoted to tout his plans to “knock the hell out of ISIS” and turn the focus on Bill and Hillary Clintons’ actions toward the women who have accused the former president of sexual assault.

“If you look at Bill Clinton, far worse – mine are words. His was action,” Trump said. “Bill Clinton was abusive to women. Hillary Clinton attacked those same women and attacked them viciously.”

Hillary Clinton challenged Trump’s accusations as “not right” while saying she wanted to “go high” in her response.

As for Trump’s comments in the 2005 footage, she said it “represents exactly who [Trump] is.”

“We have seen this throughout the campaign,” she said, recalling his negative comments toward not just women but Muslims and Latinos and others. “Yes, this is who Donald Trump is.”

The candidates veered, in between the attacks, into policy debates over taxes, ObamaCare and Syria, among other issues. Notably, Trump broke with Mike Pence on his running mate’s willingness to strike Syrian military targets. Amid speculation about Pence’s future on the ticket after the tape controversy, though, the Indiana governor later tweeted his congratulations on what he called Trump’s “debate win.”

In contrast to Trump and Clinton’s first debate, the GOP nominee arrived in St. Louis seemingly prepared to counter every attack and hit twice as hard at his Democratic opponent. He could be heard, as he was during the first debate, frequently sniffing but this was drowned out by the candidates’ constant sparring, including Trump at one point saying Bernie Sanders signed on with “the devil” when he backed Clinton.

The tensions were on full display even before the debate started – the two candidates did not shake hands as they walked out, though did at the end. The tensions flared when Trump went after Clinton for deleting thousands of emails from her time as secretary of state.

He said if he wins, he’d request a special prosecutor be appointed to “look into your situation.”

Clinton said Trump’s claims were “absolutely false” and it was good someone like him is not in charge of the law.

Trump shot back: “Because you’d be in jail.”

The two continued to spar on the email issue and when Trump suggested his opponent was eager to get off the question, she countered:  “I know you’re into big diversion tonight — anything to avoid talking about your campaign and the way it’s exploding, the way Republicans are leaving you.”

The town hall-style debate at Washington University in St. Louis indeed came as Trump essentially was trying to save his campaign, after the release of the 11-year-old tape showing him making vulgar comments about women. Numerous Republican lawmakers have – as Clinton referenced – abandoned the presidential nominee over the remarks, with some calling on him to step aside and perhaps let running mate Pence carry the mantle into November.

Trump apologized, but has vowed to stay in the race.

The debate Sunday already was considered critical for Trump after he was widely seen as struggling against Clinton at their first match-up on Sept. 26. But the release of the 2005 tape put immense pressure on him to assure uneasy supporters and perhaps win back defectors, all while continuing to make his case that Clinton is unfit for the office.

The coming days could make clear whether, with his performance Sunday night, Trump has done so.

Trump has responded to the release of the tape all along with a mix of contrition and counterattack. While he apologized, he quickly tried to turn the issue back around on Bill Clinton by invoking his past sex scandals. Shortly before the start of Sunday’s debate, Trump even held a press conference with several of the former president’s accusers.

“Actions speak louder than words,” said Juanita Broaddrick, who claims Bill Clinton raped her in 1978, which the former president has denied. “Mr. Trump may have said some bad words but Bill Clinton raped me and Hillary Clinton threatened me. I don’t think there’s any comparison.”

The 2005 Trump tape was a conversation between Trump and then-“Access Hollywood” host Billy Bush where Trump described his attempt to have sex with a married woman. Trump boasted that a star can “do anything” and added, “grab them by the p—-.”

The audio overshadowed other controversies surrounding his opponent, including the leak of thousands of emails purportedly from Clinton campaign chairman John Podesta covering information on Clinton’s Wall Street speeches. In one passage, Clinton discussed the need to have both a “public and private position.”

At Sunday’s debate, Clinton defended that speech and explained she was trying to discuss how President Abraham Lincoln had carefully negotiated with individual lawmakers in Congress during his presidency, using different arguments for different members.

Trump accused Clinton of blaming Lincoln and added: “Honest Abe never lied, that’s the difference between Abraham Lincoln and you.”