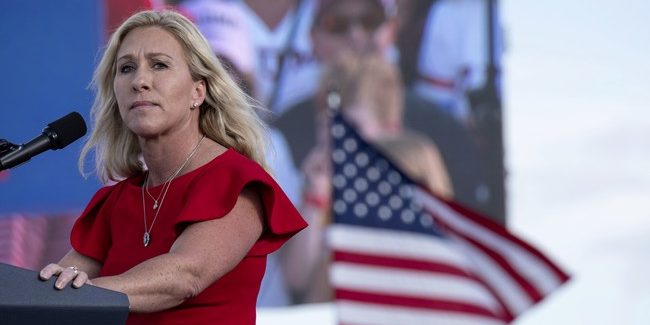 Georgia GOP Rep. Marjorie Taylor has been issued a permanent suspension from Twitter over her “repeated violations” of the platform’s COVID-19 misinformation policy, the company announced Sunday.

Greene had posted a Twitter thread Saturday about life before and after the virus and alleged that there are “extremely high amounts of Covid vaccine deaths.” Her office told the Washington Examiner that the thread led to the suspension but Twitter’s statement did not make clear whether the series of tweets was why her account was permanently suspended.

In a statement published to Telegram, Greene claimed that the social media giant “can’t handle the truth.”

“Twitter is an enemy to America and can’t handle the truth,” she said. “That’s fine, I’ll show America we don’t need them and it’s time to defeat our enemies.”

Greene has been suspended from Twitter on a number of different occasions for violating the platform’s COVID-19 misinformation policy.

In July, she was suspended from Twitter for 12 hours over two tweets claiming that the coronavirus was not dangerous for people under 65 years of age.

And in August, Greene received a week-long suspension for alleging that the vaccines did not help in mitigating the spread of COVID. She said that “these vaccines are failing and do not reduce the spread of the virus & neither do masks.”

Twitter’s COVID-19 misleading information policy states that tweets are in violation of the policy if they advance claims as facts, are demonstrably false or misleading based on widely available information and have a likelihood of causing serious harm.

The tech giant also prohibits users from sharing posts about the virus that it has specifically outlined as misleading, including the risk of infection or death from COVID-19, official regulations or the safety of preventative measures. The company’s policy, which uses a strike system to determine the length of an account’s suspension, says users face a permanent suspension after five or more strikes.

Greene’s Twitter ban comes nearly a year after it permanently banned former President Donald Trump from the platform last January “due to the risk of further incitement of violence” over his tweets about the Jan. 6 Capitol riot.