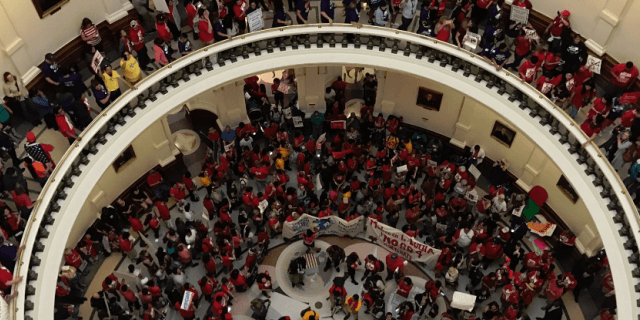 Texas State Representative Matt Rinaldi (R-Irving) claimed to have been threatened by a fellow lawmaker and assaulted by another during a Memorial Day closing session. Others claim it was Rinaldi that made death threats against Democrat legislators.

The incident occurred following protests in the House Gallery and a reported comment from Rinaldi that he called immigration officials about the protesters.In a post on Rinaldi’s official Facebook page, the representative stated Representative Poncho Nevarez (D-Eagle Pass) threatened his life. He claimed the threat occurred after he threatened to call Immigration and Customs Enforcement (ICE) officers about protesters in the House Gallery holding signs saying “I am legal and here to stay.” Texas Department of Public Safety troopers removed the protesters from the gallery after they became disruptive and held up signs protesting the state’s new sanctuary city law. Rinaldi claimed he called ICE after “Several Democrats encouraged the protestors to disobey law enforcement.”

Rinaldi also claimed to have been assaulted by Rep. Ramon Romero (D-Fort Worth) after he told Democrats he called ICE. He stated several of his colleagues heard the threats and witnessed the assault. Breitbart Texas reached out to Rinaldi to obtain more information about the altercations and to get the names of witnessing representatives. Despite leaving messages via phone, email, Twitter, and Facebook, Rinaldi and his staff did not respond to inquiries.

Nevarez did respond to inquiries from Breitbart Texas about the incident and recalled different details about the encounter.

Nevarez stated that Rinaldi’s claims are very different from the events that actually took place. The representative from South Texas revealed that while tempers did flare during the heated session the only threats came from Rinaldi who said “he would put a bullet in (Nevarez’s) head.”

Nevarez said the situation began when Rinaldi bragged to three other representatives about calling U.S. Immigration and Customs Enforcement in regards to the various groups of protesters who had gathered at the Capitol to protest SB-4, more commonly known as the “sanctuary cities bill”. Rinaldi’s actions led to an escalating argument that turned into a shoving match on the House Floor, Nevarez stated. When the scrum began, Nevarez said that he went got in the middle of it to push people back. He yelled at fellow representatives that they needed to “take it outside.”

When asked about Rinaldi’s claims about Nevarez having said he would “get him” on the way to his car, the state representative said they are fabrications of an unstable individual. According to Nevarez, various other representatives witnessed the events and heard when Rinaldi yelled out that he would put a bullet in Nevarez’s head. “Does that warrant me getting killed” Nevarez asked. “He has a violent nature, today he revealed his nature. We won’t let him push us around.” State Rep. Justin Rodriguez (D-San Antonio) said he heard Rinaldi threaten to “put a bullet in Nevarez’s head, in a press conference video Tweeted by the Texas Tribune.