Tips to save money as gas prices soar 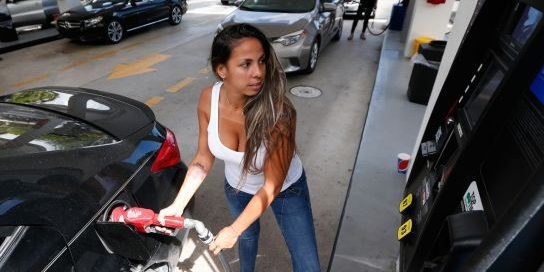 Gas prices are expected to surge above $3 a gallon, just in time for the busy summer driving season. But there are several ways drivers can keep their fuel spending in check.

AAA estimates that consumers will pay the highest Memorial Day gas prices since 2014. The national average for regular gasoline has risen to $2.95 a gallon, and prices will likely climb a few more pennies before the unofficial start of summer. Higher gas prices won’t deter road-trippers, though, with 36.6 million Americans projected to hit the road this Memorial Day—a 4.7% increase over last year.

So here are some tips to save money on gas, even as pump prices jump to three-year highs:

Use a mobile app

With popular smartphone apps from GasBuddy and AAA, drivers can find the cheapest gas station in their area.

Some credit cards offer bonus rewards when paying for gas. Websites including WalletHubOpens a New Window.allow users to sort through credit cards that offer fuel rewards. For example, the Bank of America Cash Rewards credit card offers 3% cash back on gas, compared to 2% at grocery stores and 1% on other purchases, according to WalletHub. Grocery chains like Safeway and Kroger also offer fuel discounts in partnership with gas stations.

During a period of rising gas prices, drivers should plan on filling up the tank in the morning. Gas stations typically set prices early, around 10 a.m. Commuters should also avoid buying gas on Friday, Saturday or Sunday, when gas stations anticipate strong demand. Experts say it’s best to visit the gas station on Wednesday.

Most gas stations charge extra for customers who choose to pay with plastic. Paying in cash can often save as much as 10 cents per gallon.

Easy on the gas pedal

Quick acceleration, braking and speeding can cut gas mileage by 10% to 40% in stop-and-go traffic, according to FuelEconomy.govOpens a New Window.. To save gas, drivers can gradually accelerate, allow their vehicles to coast and avoid slamming on the brakes when approaching a red light. Using cruise control also helps save gas.

Many modern vehicles have engine stop-start technology, which automatically shuts down the engine when idling at a red light and restarts it when the brake is released. Some cars don’t allow drivers to turn the system off, but make sure stop-start is activated to help save gas. Idling an engine can use more gas than restarting it.

Give your car a tune-up

Cars that are properly maintained and pass emissions tests can improve gas mileage by an average of 4%, according to FuelEconomy.gov. Tires that are inflated to the manufacturer’s specifications offer a 0.6% benefit to fuel economy on average. Tire pressure specifications are typically found in the driver’s side door jamb, the glove box or the owner’s manual.