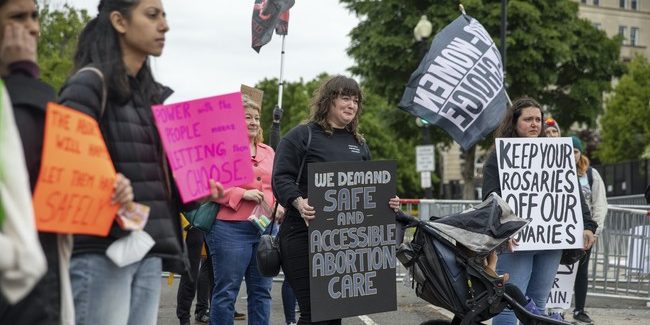 Of course, Treasury Secretary Janet Yellen would take this position on abortion. I don’t know why she decided to weigh in on the issue. She has bigger fish to fry, like getting inflation under control, but she noted how women could be impacted negatively if Roe v. Wade is overturned. She declared it could set women back decades.

The problem is that end of Roe v. Wade is not the end of abortion. Abortion won’t be banned if Roe is trashed. It will be left to the democratic process. Even red states probably won’t ban it but have strict restrictions over it. It’s the same game. The media peddles the supermajority that wants Roe maintained but fails to cite the other polls showing an equal number of voters supporting restrictions on abortion, specifically bans on late-term abortion. Banning abortion after 20 weeks is also popular, with 60 percent of women supporting the measure. That’s the European standard for the most part.

Europe has stricter abortion laws than we have here if you could believe that. The irony shouldn’t be lost either as the American Left has lusted to be more like Europe since…forever.

This all stems from the leaked Supreme Court opinion in the Dobbs case which will likely overturn the landmark decision. Now, we have unhinged pro-aborts clamoring outside the homes of Supreme Court justices. It’s a mob. We have the media freaking out that a theocracy is upon us. And we have Democrats on the Hill sprinting to codify abortion into law. The latter part is interesting since this is exactly how this issue should have been decided via the legislative process. Again, there is nothing in the Constitution about abortion. It doesn’t prohibit it. If you want a legal right to it, pass a law. If you want to ban it, pass a law. There is no constitutional right to an abortion. That’s fake news. It’s prime liberal propaganda on the issue. The Left now must craft a message about how baby killing is beneficial and fun. Not an easy task, especially with the clowns who take control of the bullhorn nowadays. That’s why they’re really freaking out. They’re defending the indefensible. If it was more measured, like support on bans after a certain trimester, maybe they could cobble together the public support needed, but any restriction is viewed as a ban in the eyes of the Left which highlights how this side has become totally insane over the past 4-to-8 years.