‘A Fire Broke Out’: Politico Covers for Pro-Abortion Activists Who Firebombed Conservative Org 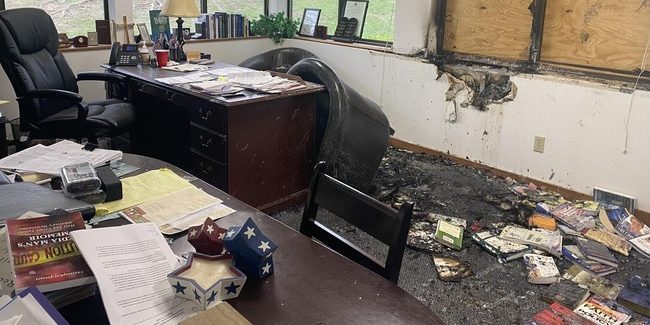 The mainstream media has not been known for its neutrality when it comes to reporting on the issue of abortion or its pro-life opponents. Following the unprecedented leak of a draft Supreme Court opinion suggesting Roe v. Wade was set to be overturned, the media doubled down on unhinged and hyperbolic coverage, indulging Democrat talking points and giving credence to pro-abortion claims that are simply not true.

But when it comes to harassment, threats, protests, and violence targeted at conservatives and pro-life causes by the left, the media becomes suddenly quiet. This phenomenon was seen again in Politico’s Monday morning newsletter in which they noted in a “for your radar” section an incident that took place at a pro-life organization in Madison, Wisconsin, over the weekend:

FOR YOUR RADAR — A fire broke out Sunday at the office of an anti-abortion group in Madison, Wis., where “If abortions aren’t safe then you aren’t either” was written on the wall.

Oh, “a fire broke out,” you say? Well, that would be true of an electrical fire, a toaster oven left unattended, or a candle that didn’t get put out. Here’s what actually happened, according to the very link Politico sent readers to for more information — information they conveniently omitted from their newsletter blurb: “Vandals set a fire inside the Madison headquarters of the anti-abortion group Wisconsin Family Action early Sunday, police and an official with the group said Sunday.”

Authorities are calling the attack “an arson” and police found “remnants of at least one Molotov cocktail.” But that, according to Politico, is just a fire breaking out. Not one being set by leftist agitators. It just “broke out.” Right.

Politico wasn’t alone in its biased characterization of the violent attack on pro-life Americans — The Hill also piled on with an absurd and reality-denying attempt to obfuscate the leftist pro-abortion radicals behind the destructive attack.

Perhaps more bizarrely, and where The Hill and Politico potentially got its misdirecting angle, is the Madison Police Chief’s statement on the attack. It states that “The Madison Police Department understands members of our community are feeling deep emotions due to the recent news involving the United States Supreme Court” before adding the “department has and continues to support people being able to speak freely and openly about their beliefs. But we feel that any acts of violence, including the destruction of property, do not aid in any cause,” the police statement adds.

So, Madison’s police seem to offer a defense for the arsonists who set fire to the pro-life organization’s office, before issuing a meek call for nonviolent protests because destroying property doesn’t “aid in any cause.” Tell that to Antifa and BLM, but it’s a little late for that… It’s no secret that Madison is a nearly-communist enclave of super libs, but even this is insane for the authorities supposedly protecting the city’s residents. They have, apparently, adopted a “fiery but mostly peaceful” view of leftist violence against organizations supporting life and opposing abortion.