Trump says he has ‘instructed’ DHS Secretary Nielsen not to let caravans into US: ‘It is a disgrace’ 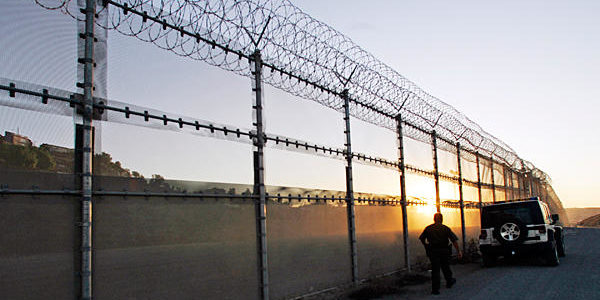 President Trump said Monday he has “instructed” Homeland Security Secretary Kirstjen Nielsen not to allow “large caravans of people” into the U.S. as a group of Central American migrants starts to reach the border, calling the situation a “disgrace.”

“Despite the Democrat inspired laws on Sanctuary Cities and the Border being so bad and one sided, I have instructed the Secretary of Homeland Security not to let these large Caravans of people into our Country. It is a disgrace. We are the only Country in the World so naïve! WALL,” Trump tweeted early Monday.

The president’s directive came as a group of about 50 Central American migrants who left southern Mexico in March reportedly reached the U.S. border, planning to seek asylum. According to U.S. Citizenship and Immigration Services, asylum seekers must “demonstrate [they] have suffered persecution or fear that they will suffer persecution due to” five factors: race, religion, nationalist, membership in a particular social group, or political opinion.” The group left the Guatemala-Mexico border in late March and grew to more than 1,000 migrants. More migrants will reportedly be arriving at the U.S. border in the coming days. Last week, Mexico’s National Immigration Institute said its agents found hundreds of migrants packed into trucks in the Gulf Coast state of Veracruz, in the north-central state of Hidalgo, and in central Mexico.

The caravan peaked at around 1,500 people, but has mostly shrunk under pressure from Mexican migration authorities who vowed to separate the migrants with a right to stay in Mexico from those who did not, and Trump’s call for the National Guard to help secure the border. A spokesman for the Department of Homeland Security did not immediately respond to Fox News’ request for comment on when the president directed Nielsen to stop allowing caravans into the country, and what other policies they would be practicing as hundreds of migrants are reportedly expected in the coming days. “Mexico, whose laws on immigration are very tough, must stop people from going through Mexico and into the U.S. We may make this a condition of the new NAFTA Agreement. Our Country cannot accept what is happening! Also, we must get Wall funding fast,” Trump tweeted again.

The Trump administration has been in negotiations with Mexico and Canada over the North American Free Trade Act (NAFTA) for months, efforting renegotiation for the agreement that the president has said has killed jobs in the U.S. As for his central campaign promise to build a wall along the U.S.-Mexico border, Trump has received $1.6 billion as part of the omnibus spending package signed last month, for technology and some replacement of existing border fencing. But the wall, in total, is estimated to cost approximately $20-25 billion. Also Monday, the president blasted Democrats as “obstructionists,” suggesting they may not vote to confirm his nominee for secretary of state, former CIA Director Mike Pompeo. “Hard to believe Obstructionists May vote against Mike Pompeo for Secretary of State. The Dems will not approve hundreds of good people, including the Ambassador to Germany. They are maxing out the time on approval process for all, never happened before. Need more Republicans!”

Pompeo’s confirmation hearing is set for Monday afternoon, but seemingly lacks support for a positive vote from the Senate Foreign Relations Committee. If left unconfirmed, it would be the first time since 1925 the committee voted against a president’s nominee as the nation’s top diplomat.