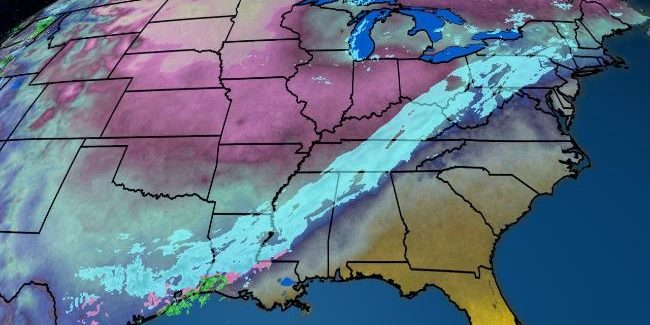 Winter Storm Inga is bringing snow and ice to the South on Tuesday and will also spread accumulating snow to the East Coast through Wednesday. A long band of light to locally moderate snow is ongoing from the interior Northeast southwestward into Kentucky, Tennessee, northern Alabama, northern Mississippi, southern Arkansas, northern Louisiana and Texas.

Inga brought some impressive snowfall totals to western Kentucky, including 9 inches in Murray and 8.1 inches in Paducah. Up to a half foot of snow has also been measured in east-central Arkansas near Palestine. Snow-covered roads have been reported in the Memphis and Nashville, Tennessee, metro areas. Portions of the Austin, Houston and San Antonio metros have seen numerous vehicle accidents due to light freezing rain and sleet accumulations this morning. Icy conditions have also been reported to the east of the Dallas-Fort Worth Metroplex, resulting in accidents near Canton.

How Much Snow and Ice?