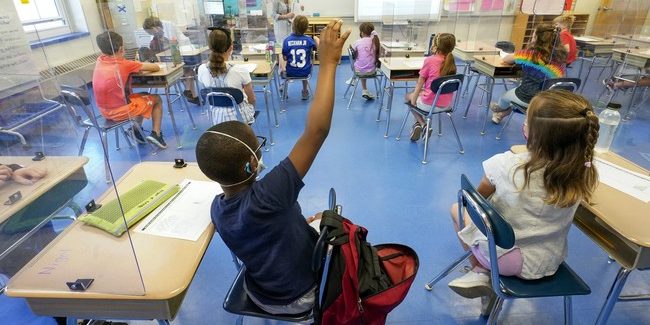 During its annual representative assembly recently, the nation’s largest teachers union voted to promote Critical Race Theory in roughly 14,000 school districts it collaborates with across the country. But following pushback, the agenda item has been scrubbed from the National Education Association’s website. The NEA stated that it opposed “attempts to ban critical race theory and/or The 1619 Project” and vowed to “share and publicize” “information already available on critical race theory (CRT) — what it is and what it is not.”

The Manhattan Institute’s Chris Rufo captured the NEA’s plans for CRT in its entirety.

But by Tuesday, Heritage Action for America’s Jessica Anderson noticed the NEA scrubbed the section from its website.

In a separate agenda item, the NEA vowed to go after organizations that opposed CRT, specifically naming the Heritage Foundation.

“NEA will research the organizations attacking educators doing anti-racist work and/or use the research already done and put together a list of resources and recommendations for state affiliates, locals, and individual educators to utilize when they are attacked,” the item stated. “The attacks on anti-racist teachers are increasing, coordinated by well-funded organizations such as the Heritage Foundation. We need to be better prepared to respond to these attacks so that our members can continue this important work.”

As Townhall previously reported, Heritage Action has been working hard to stop the implementation of the toxic ideology, as have a number of other organizations, including Parents Defending Education and Parents United America.