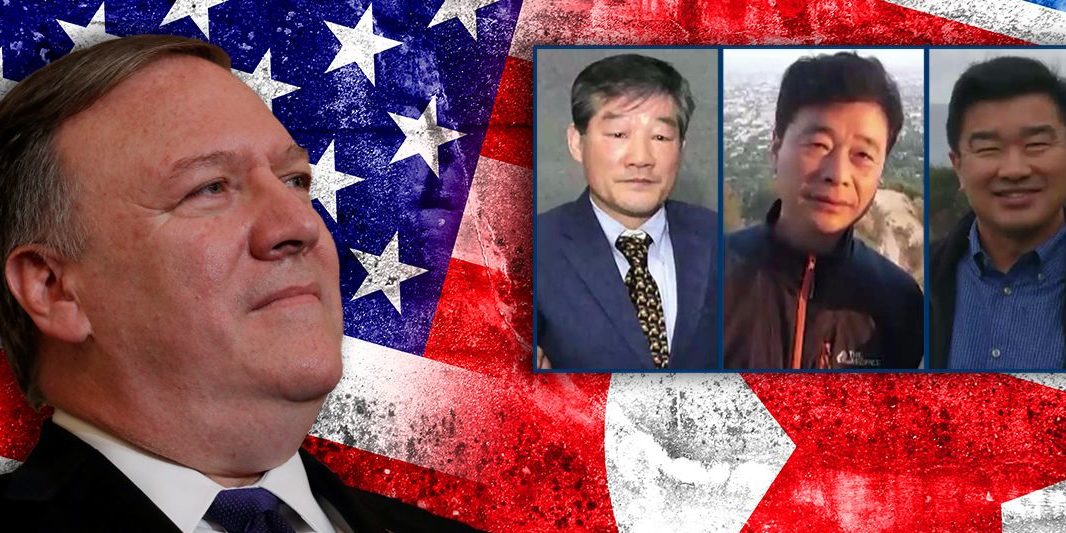 Three American prisoners held in North Korea have been released and are en route to the U.S. after a surprise diplomatic mission by Secretary of State Mike Pompeo, President Trump announced Wednesday.  Pompeo is returning with the Americans, said to be in “good health,” after a brief visit to Pyongyang. Trump said he plans to greet them at Andrews Air Force Base when they arrive outside Washington.

“I am pleased to inform you that Secretary of State Mike Pompeo is in the air and on his way back from North Korea with the 3 wonderful gentlemen that everyone is looking so forward to meeting,” Trump tweeted, referring to the prisoners. “They seem to be in good health.”

Trump also said that a date and location have now been set for his meeting with Kim Jong Un. White House Press Secretary Sarah Sanders said in a statement that Trump “appreciates leader Kim Jong Un’s action to release these American citizens, and views this as a positive gesture of goodwill.”

“The three Americans appear to be in good condition and were all able to walk on the plane without assistance,” she said. Pompeo arrived in North Korea on Tuesday to prepare for the upcoming summit between the two leaders. Trump, announcing Pompeo’s visit, had hinted at the possibility of the prisoners’ release.

Pompeo was heading to North Korea just as Trump announced the U.S. would pull back from the Iran nuclear agreement. Trump is hoping to now make headway against North Korea’s nuclear weapons program.

Ahead of the planned summit, Trump hinted last week that the release of the prisoners was imminent, saying in a tweet: “stay tuned.” White House Press Secretary Sarah Sanders said that it would be seen as “a sign of good will” if North Korea released the prisoners.

The Americans were all detained or sentenced within the last couple years.

Kim Dong Chul, a South Korea-born U.S. citizen and former Virginia resident, was sentenced in April 2016 to 10 years in prison with hard labor after being convicted of espionage. He reportedly ran a trade and hotel service company in Rason, a special economic zone on North Korea’s border with Russia.

Tony Kim was detained at Pyongyang’s airport in April 2017 and accused of unspecified “hostile acts” against the regime. He taught accounting at the Pyongyang University of Science and Technology. Kim Hak Song, an ethnic Korean born in China, was detained in May 2017 for “hostile acts.” He worked in agricultural development at an experimental farm run by the Pyongyang University of Science and Technology, which was founded in 2010 with donations from Christian groups. Another American detainee, Otto Warmbier, died in June 2017 — just days after he was brought back to the U.S. with severe brain damage. He had been arrested in January 2016 and accused of stealing a propaganda poster and was sentenced to 15 years in prison with hard labor. Pompeo’s short trip is the latest move in a constantly evolving diplomatic situation in the region. Kim met with Chinese President Xi Jinping in China on Tuesday, the second meeting in recent months, and also met this month with South Korean President Moon Jae-in in South Korea. During the summit, the two discussed denuclearization and declared a formal end to the Korean War. The North Korean regime has also claimed it will end its nuclear weapons and intercontinental ballistic missile testing program.