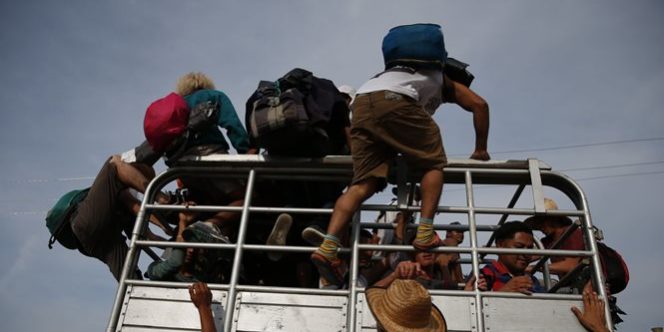 The second Central American caravan has been heading towards the United States-Mexico border for awhile. This new caravan was originally supposed to have roughly 2,000 people on it. According to Mexico, that number has multiplied and currently sits around 12,000. The caravan is expected to arrive at the border on Monday, in plenty of time for President Donald Trump’s Tuesday State of the Union address, Fox News reported. To intensify orders, the Pentagon recently announced an additional 3,750 troops were being deployed to the border.

This new caravan began on Jan. 15 in Honduras. Their final stopping point will be in Piedras Negras, Mexico, right along the Texas border, where Mexican officials have established shelters for the caravan riders. If the United States refuses to grant the riders asylum, some riders plan to cross into the United States illegally.

“For security reasons, I cannot say which way we’re going to take,” El Salvadorian Antonio Morales told Fox News. “Plus, if Mr. Donald Trump is watching, I can’t tell you where I’m going to go to get into your country.” The governor of Coahuila Miguel Riquelme, the state where the shelters are established, welcomed the caravan riders and provided them with food, shelter, phone calls, haircuts and health care.

Jose Fraustro, the Secretary of Coahuila, said the caravan should have been kept along Mexico’s southern border instead of allowing the riders to trek an additional 1,300 miles. Now, the riders are facing health issues and long waits to get into the United States under an asylum claim.  Caravan riders have had respiratory infections and gastrointestinal conditions. There have been five cases of chicken pox, one individual with HIV and one case of swine flu.