Houston officer hurt in shooting wrote in note: ‘I had to go in, I knew my guys were down’ 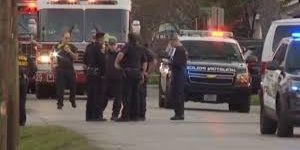 mong the five Houston police officers injured during a shooting on Monday was a 54-year-old supervisor, described as being “tough as nails.” The unidentified senior officer, a 32-year veteran of the force who “breached the door” while serving a search warrant at a home of suspected drug dealers, “made entry” because he knew “his partners were down,” Houston Police Chief Art Acevedo said Tuesday.

The officer was shot after jumping into the action and it marked “the third time in his career he’s been shot,” Acevedo said. He was previously shot in 1992 and 1997, he added. Acevedo explained that the supervisor later gave a note to another officer that said: “I had to get in there because I knew my guys were down.”

he officer was described by the police chief as being “a big teddy bear,” but also someone who has “tremendous courage” and is “a strong ox.”

“I am going to rub that man for two reasons. One, I want some of his courage to rub off on me and the other thing I want, he’s done something good in life that God really watches over him,” Acevedo said. Of the five officers wounded during Monday’s shooting, four were shot and one suffered a knee injury. Additionally, two suspects were shot and killed during the exchange with police. They were identified by authorities Tuesday as Rhogena Nicholas, 58, and Dennis Tuttle, 59.

Two of the officers, the aforementioned 54-year-old and a 40-year-old, are in serious condition after both were shot in the neck, Houston Police said on Twitter.

A 50-year-old officer who’s been part of the department for 27 years is in good condition but expected to stay at the hospital after suffering a serious knee injury, police said. Another 50-year-old officer, a 25-year veteran of the force who was shot in the face, was released Tuesday from Memorial Hermann Hospital, they tweeted.

The shooting erupted after a group of about a dozen members of the Houston police narcotics unit responded to a residence they suspected was a hub for drug dealing, particularly the sale of “street-level narcotics” like “black tar heroin,” Acevedo said. Officers found no heroin there Monday, but they recovered marijuana, an unidentified white powder, and two rifles, he said.