Are You Kidding Me? An ICE Official Had To Give Illegal Immigration 101 To A Democratic Senator 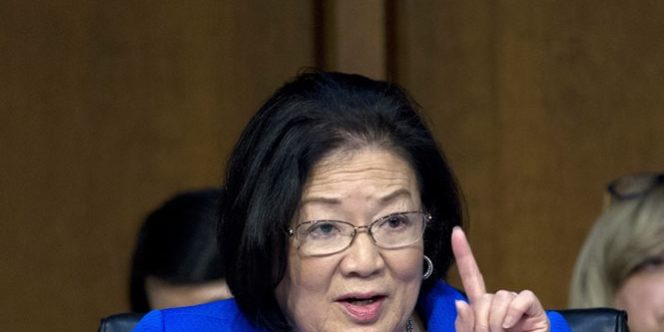 Oh my God we had a doozy yesterday during a hearing on child separations on the Hill. The Senate Judiciary Committee asked officials from Immigration and Customs Enforcement about the policy and Sen. Mazie Hirono (D-HI) seemed to know jack about our current immigration laws. I mean, basic stuff, like the fact that it’s a federal crime to enter the United States illegally.

Matthew Albence, the Executive Associate Director for Enforcement and Removal Operations for ICE, had to give Hirono illegal immigration 101 after the latter said she was “confused.” Yes, you read that right; a lawmaker was confused that entering the country illegally is, you know, a crime. Hirono tried miserably to claim that arresting illegal aliens is a Trump policy. Nope. It’s been set in stone for decades, lady. It was appallingly stupid. It was embarrassing. And it shows just how far left the Democratic Party has gone on this issue: they don’t even know basic immigration law. For some on the Left apparently, history did not begin until Donald Trump was elected president (via NTK Network):

“These individuals are [at detention facilities] because they have broken a law,” ICE official Matthew Albence told Hirono.

“They have broken a law only as deemed so by the president,” Hirono argued.

Albence then cited the exact statute, passed by an act of Congress, that criminalized unauthorized border crossings. “Illegal entry is both a criminal and civil violation,” he explained. “They have broken the law.”

This is when Hirono said, “I’m confused.” Right, and we’re going to give control of Congress to you brain-dead liberals. They’re called illegal immigrants for a reason. They’ve broken the law. This is what happens when you drink the political correctness Kool-Aid and adopt the senseless no one is illegal mindset, or call illegals undocumented persons, you sort of lose grip on reality, as demonstrated here. You come here illegally; it’s a crime. You get caught; you get arrested, and deported. If there are children with adults, they’re separated, as human traffickers feign parental status. These are common sense policies. They’re good policies, and they’re being enforced because we won and you lost. That’s what happens; elections have consequences. And no, ICE isn’t going to be abolished, despite the clamoring of the despicable progressive Left. Oh yeah, the anti-ICE crowd is great; they only call officers who happen to be people of color the n-wordfor enforcing the law. But please keep making that battle cry. It’s only going to help us.