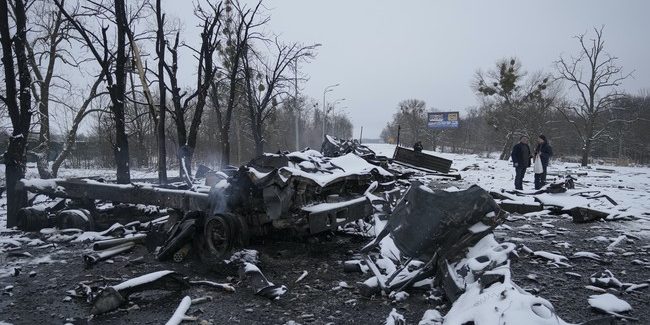 Russian forces continued to hammer the city of Kharkiv in northeast Ukraine as Putin’s unprovoked assault entered its sixth day on Tuesday, including a direct hit on a government building in the city’s Freedom Square as attacks on non-military targets escalate.

In a video tweeted by Ukraine Minister of Foreign Affairs Dmitry Kuleba that has been verified by NBC News and other outlets, a fireball erupts after a missile slams into the building. Kuleba’s video includes footage of Ukraine’s Emergency Service combing through what remains of the rubble while initial reports from those on the ground say there are multiple civilian casualties, including a child.

The attack on government and residential buildings in Kharkiv comes as Putin directs his troops to target residential centers and is coming under international scrutiny for his indiscriminate assaults on non-military targets. “It is not just a war,” said Kharkiv’s mayor of the Russian onslaught. “It is a murder of the Ukrainian people.”

More than 10 civilians were killed and scores more injured by Russian attacks on Monday in Kharkiv and, as The Wall Street Journal noted, “an indication that Moscow may be shifting to a more destructive approach” as seen in attacks that hit two residential neighborhoods.” Putin will also reportedly be shifting to night operations soon as he grows more frustrated with Ukraine’s effectiveness against Russian forces.

Ukrainian President Zelenskyy pledged that “there will definitely be an international tribunal for this crime” and “no one in the world will forgive [Putin] for killing peaceful Ukrainian people,” calling Russia’s actions “a violation of all conventions.” Speaking via video to European Parliament on Tuesday, President Zelensky talked about the attacks on Kharkiv, Kyiv, and other cities and his country’s fight for its survival. “This is the price of freedom,” he said.

“We are fighting for our rights, for our freedom, for our lives, and now we are fighting for our survival,” Zelensky told the EU. “Nobody will break us, because we are Ukrainians,” he added as a standing ovation from members of European parliament, most of whom wore blue and yellow pins and held up Ukraine’s flag, showed solidarity against Putin’s tyranny.