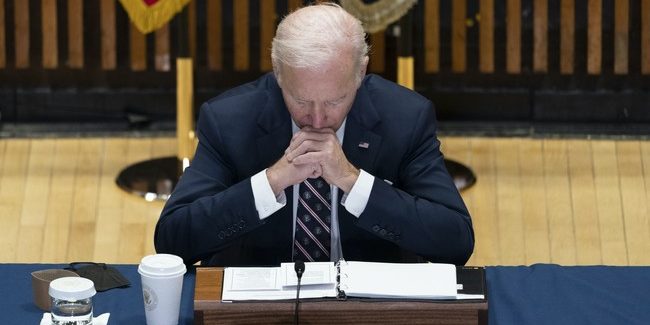 As President Biden prepares to deliver his first State of the Union address on Tuesday evening, Americans have already made up their mind about how they view the direction of the United States, and they’re not impressed.

According to new numbers out from Gallup, barely one-fifth of Americans surveyed are satisfied with the current state of our Union.

Gallup’s survey also found that more than three-fourths — 78 percent — of Americans are dissatisfied with the way things are going. While satisfaction is slightly higher than in the previous survey, Gallup notes that the results of their latest poll is “among the lowest since President Joe Biden took office.”

Roughly one-third of respondents cited economic issues as a reason for their discontent, which comes as no surprise while inflation continues to outpace wage growth and cause pain for citizens at the gas pump, in the grocery store, and when it comes to paying utility bills.

Problems with government and leadership were also a prominent concern according to Gallup, with 20 percent of respondents mentioning it as a top-of-mind issue.

Tuesday night’s address will be a heavy lift for Biden. Americans unsatisfied with the effects of Biden’s economic policies, his weak leadership will be listening critically for hope that Biden might announce action to alleviate inflationary pressure, make the United States stronger on the world stage, and help families and businesses continue recovering from the pandemic. With more than three-quarters of Americans currently unsatisfied with the state of the country, attempts by Biden to claim victories over COVID, in Afghanistan, or on economic progress will be brushed off as partisan posturing in a midterm year.

For comparison, Gallup’s survey before President Trump’s final State of the Union address in 2020 showed an entirely different reality. “As Trump enters his re-election year, Americans are more positive on eight key issues than they were just before he took office in January 2017,” Gallup reported then. When asked about their views on the economy, military strength, economic opportunity and overall quality of life in the United States, “Most Americans say they are satisfied with each of these aspects of the country.”