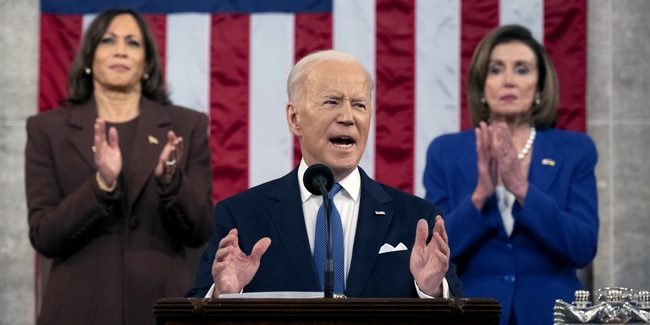 President Biden’s first State of the Union address was supposed to be a rest for his administration and set the tone for Democrats ahead of the midterms but all it — and the multiple Democrat responses to Biden — did was show that the Dems in Disarray narrative is here to stay.  Apart from Biden’s apparent amnesia about much of Democrat actions during the last year, there were several moments that caught Townhall’s eye and reminded everyone that the United States government is more like HBO’s VEEP than The West Wing’s lofty depiction of life in Washington. In no particular order, here are the moments that left people scratching their heads.

House Speaker Nancy Pelosi’s reaction to Biden’s remarks about U.S. service members afflicted by exposure to toxic burn pits was… something. Seriously, what is she doing? Smiling, rubbing her fists together, and rising to her feet? Was she even listening to what Biden was saying? Her decision to tear up President Trump’s speech was at least a coherent reaction for a petty liberal, but this is mind-boggling.

We already knew that President Biden was against walls, but we always assumed it was because his administration was coopted by radical leftists who objected to a secure and safe U.S.-Mexico border. Apparently, Biden’s concerns also stem from the fact that it’s impossible to build a wall that’s tall enough to prevent vaccines from crossing. Presumably, Biden meant to say it’s impossible to build a wall high enough to keep out a virus, but his administration’s open border policies have caused public health crises in American communities along the border. Not just COVID, either, but other infectious diseases as well.

Similar to Speaker Pelosi, Senate Majority Leader Chuck Schumer was also gunning to be the first on his feet at inopportune moments, as seen in his smiling leap that coincided with a boo-eliciting line from Biden. The awkward look of realization on his face says it all.

Go get him! Who? We don’t know and seemingly neither does President Biden despite it being his closing line. Is “him” Putin? Corn Pop? A dogwhistle to anti-feminists? A directive for Biden’s handlers to go rescue him from the House floor before he wandered off? We’ll likely never know unless Nicholas Cage finds the Presidents’ Secret Book again.

Then there was the HBOTUS — Head-Butt of the United States, that is — yet another weird interaction as President Biden walked through the House chamber. We knew he sniffed hair and kissed kids, but this was a new one. And even though the Capitol Physician had conveniently lifted the Capitol’s mask mandate in time for Biden’s speech Tuesday night, I don’t think the CDC recommends bumping foreheads as an acceptable alternative to handshakes.

How much is a pound of Ukrainians worth? Joe Biden seems to think he knows, or maybe he doesn’t. A line about the determination and strength of Ukrainians in the face of Putin’s attacks turned into something of a rap about pounds, proud people, pound for pound, and every “inch of ernegy” — yes ernegy — they have. The mess of comparisons — ounce would have made more sense than inch — only left Americans wondering what the comparison is between pounds of Ukrainians to inches of ernegy and whether those measures can be converted to metric.

The portion of his speech on Ukraine tripped Biden up several times. Even before his State of the Union address, Biden confused Iraq and Ukraine with Afghanistan like a grandparent doing the roll-call through his grandkids’ names until he found the right one. Tuesday night saw similar confusion as Biden declared that Putin won’t win over the “Iranian people.” Much like fictional VEEP President Selina Meyer’s reaction to her teleprompter glitching during an address to Congress, “there are literally no words.”

And as an honorable mention: Kamala Harris’ reaction to Biden’s mistaken use of Iranian, a real-time fact check of the man who plucked her from a primary campaign that went down in flames to place her one heartbeat away from being the leader of the free world. It’s a priceless reaction that suggests she’s used to quietly correcting Biden’s gaffes under her breath.

Vespa has more on Harris’ quiet suffering behind Biden during the State of the Union here, and a summary of how the mainstream media tried to (and at times gave up trying to) spin Tuesday’s speech here.