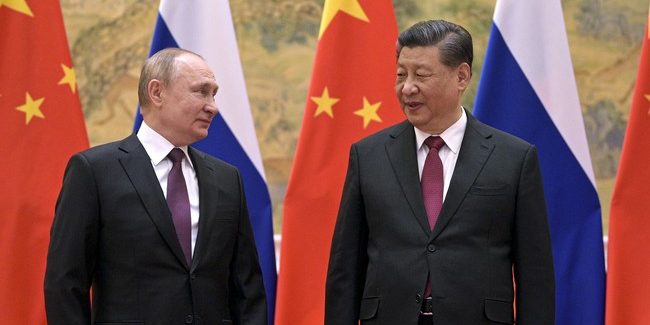 As dozens of countries and scores of companies seek to isolate and alienate Russia for its invasion of Ukraine, the Chinese Communist Party is taking advantage of the violence to deepen its relationship with Putin by blaming and attacking the United States. In its latest propaganda campaign, China’s genocidal regime seeks to back Putin in Europe while alleging that the United States is a threat to China’s citizens.

As The Associated Press characterized the deepening relationship between Russia and China, “President Xi Jinping’s government has tried to distance itself from Russia’s offensive but avoided criticizing Moscow” while the CCP “has offered to act as mediator and denounced trade and financial sanctions against Russia.”

“Media outlets were told last week to post only pro-Russian content and to censor anti-Russian or pro-Western views, according to a copy of instructions posted on the social media account of the newspaper Beijing News,” AP reported:

The State media repeat Beijing’s position that the United States and its European allies are to blame for the Ukraine war because they failed to respond to Russian concerns that its democratic neighbor should be barred from joining NATO, the Western military alliance.

That echoes Chinese complaints that Washington and its allies are interfering in its domestic affairs and issues of national sovereignty, including its claim over Taiwan, territorial disputes in the South China Sea, and in Xinjiang, the far-western region where China has been accused of detaining over a million Uyghurs.

The development is unsurprising given how China reacted to the Biden administration’s attempts to get the CCP to talk Putin out of invading Ukraine. Over three months of talks between the U.S. and China, officials took the intelligence provided by Biden officials and gave it to Putin while claiming the United States was destabilizing the situation in Europe.

Just as China played Biden before the invasion, the CCP is looking to use Russia’s onslaught against Ukraine as an opportunity — especially as China has watched the world unite against Russia for invading a smaller neighbor, likely raising fears of what may happen if the CCP were to make a move on Taiwan.