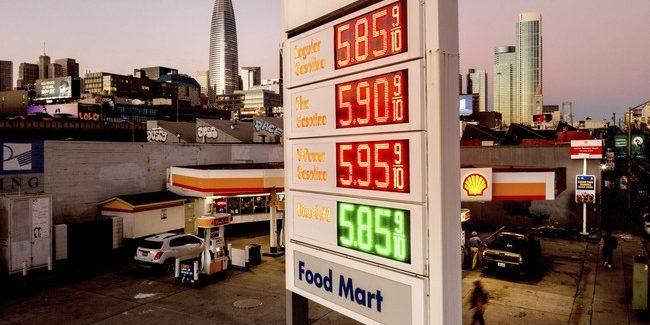 As inflation caused by President Biden’s policies continues to drive fuel prices higher, Russia’s invasion of Ukraine and the international instability that’s followed has resulted in a new record-setting highs at the pump beginning on Thursday: $5.067 per gallon on average in San Francisco — the first time a U.S. city passed the $5 mark.

Fuel prices elsewhere in the country continue to rise as well, and a 10-cent increase overnight drove the U.S. national average for a gallon of gas to $3.837 on Friday — 41 cents higher than one month ago, and $1.09 more per gallon than one year ago.

The folks at GasBuddy warned this week that San Francisco’s record-setting prices aren’t likely to be the peak of this surge either. As the weather warms in northern states, demand will increase and prices will rise along with it.

“Unfortunately, this record is likely just the beginning of a larger trend of price spikes to come to California and the entire country,” noted Patrick De Haan, head of petroleum analysis for GasBuddy, on Thursday.