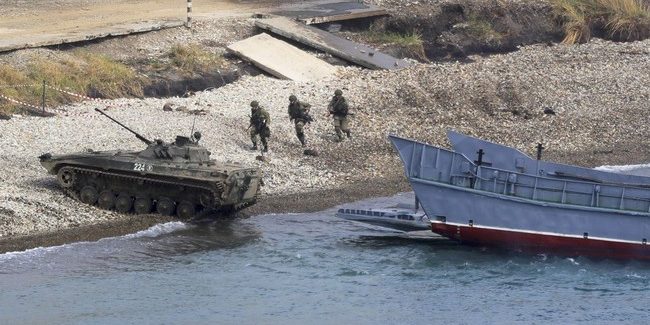 It’s happened. Russian troops have moved beyond the would-be separatist regions of Ukraine and a full-scale offensive against the rest of the country has occurred. Reports poured in last not of a shock-and-awe-style assault. The capital Kyiv was attacked. Odessa had reports of an amphibious landing by Russian forces. It was later reported that Russian marines were indeed on the ground. Ukraine has zero defense against Russian missiles and fighter jets and while reservists have been called up and martial law declared—this nation simply does not have the capability to defeat Russia. We all knew that. Yet, the economic pain of this conflict was already being felt before the shelling began. Now that tanks are rolling, the market was torched and oil prices have been hurled through the roof (via NBC News):

U.S. stocks plummeted at the market open on Thursday after Russia launched attacks on Ukraine from multiple fronts.

The Dow Jones Industrial Average opened down more than 700 points, or 2.19 percent, while the Nasdaq Composite lost roughly 1.66 percent. And the S&P dropped 1.81 percent.

Brent Crude opened at $104.23 per barrel on Thursday morning.

Putin warned other countries that if they tried to intervene they would face a Russian response “so severe that no foreign nations have ever experienced it before.”

Now, the liberal media has already tried to tie the inflation and gas price crisis entirely to this Ukraine situation. False. Americans have been seeing their wallets get shredded by these factors months before Russia became super-aggressive with Ukraine. CBS News had an embarrassing headline yesterday pinning the blame for the rising costs of this crisis. If you check today, they changed the headline. It’s now ‘How the Ukraine crisis is already hitting Americans’ wallets.’  It used to be ‘The U.S. economy has been hit with increased gas prices, inflation, and supply-chain issues due to the Ukraine crisis.’

Biden supposedly spoke with the Ukrainians last night. Sorry, I just don’t believe that; he was asleep. This is a situation so serious that we won’t hear from him until later this afternoon. Trump gave remarks before Joe. Keep an eye out if new sanctions include cutting Russia out of the Society for Worldwide Interbank Financial Telecommunication (SWIFT), which will only add more to the chaos.