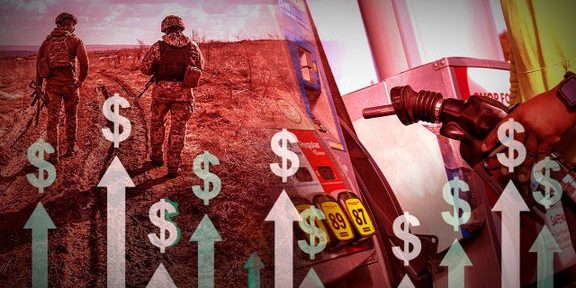 An armed clash between Ukraine and Russia, coupled with punishing sanctions for Moscow, could push U.S. stocks toward another major loss, according to Goldman Sachs economists.

The S&P 500 entered correction territory Tuesday, down 10% from its last peak, as investors weighed the conflict and fresh U.S. and U.K. sanctions on Russia. For the year, it’s down over 9%.

In a note this week, Goldman economist Dominic Wilson said the S&P 500 could drop 6.2% in a scenario in which the crisis escalates and “outright conflict” breaks out. The tech-heavy Nasdaq Composite, meanwhile, could plunge 9.6%. The benchmark is already off over 14% this year.

“Although Russia/Ukraine tensions appeared to affect primarily local assets in January, spillovers to global assets have been much more obvious in February,” the analyst note said. “If risks flare up further, and we shift to an outright conflict scenario coupled with punitive sanctions, the build in political risk premium would very likely extend.”

The analysts came to their conclusion by reviewing recent moments when tensions flared, and then measuring the sensitivity of global assets to the Russian ruble. The ruble could plunge 10% against the dollar if the fighting intensifies, they said.

A woman holds a Ukrainian flag next to a banner reading ‘Stop Putin, Stop War,’ as youth groups protest Ukraine intervention with human chain in front of the Russian Embassy on Feb. 22, 2022, in Berlin. (Getty Images / Getty Images)

Russia is the world’s second-largest producer of both oil and natural gas; a conflict or sanctions could disrupt the oil market even further at a time when high demand is outpacing tight supplies. OPEC and other oil-producing nations, together known as OPEC+, have resisted calls to boost supply.

Goldman also estimated that the crisis could push oil prices 13.6% higher. Crude closed at $92.35 per barrel on Tuesday.

The choppy trading session came as President Biden on Tuesday afternoon announced a raft of heavy financial sanctions against Russian banks and oligarchs, accusing Moscow of flagrantly violating international law in what he called the “beginning of a Russian invasion of Ukraine.”

A military vehicle drives on a road as smoke rises from a power plant after shelling outside the town of Schastia, near the eastern Ukraine city of Lugansk, on Feb. 22, 2022, a day after Russia recognized east Ukraine’s separatist republics and order (Getty Images / Getty Images)

He pledged to impose more sanctions if Russian President Vladimir Putin continues to escalate the conflict.

“Let me be clear, these are totally defensive moves on our part,” Biden said during a brief White House address. “We have no intention of fighting Russia.” Biden joined the European Union in levying harsh sanctions against Moscow: The 27-member bloc of nations also voted to target Russia over their actions in Ukraine, including Germany announcing that it would halt the certification of the Nord Stream 2 gas pipeline.    Russia has amassed an estimated 150,000 troops on three sides of Ukraine, and Biden has repeatedly warned that Putin plans to invade the country. Moscow has repeatedly denied that it is planning to attack Ukraine.

Biden and Putin have tentatively agreed to hold a bilateral summit after French President Emmanuel Macron brokered a deal in a last-ditch effort to avoid war.