After Clarifying the Definition of ‘Invasion,’ Biden Announces New Sanctions on Russia 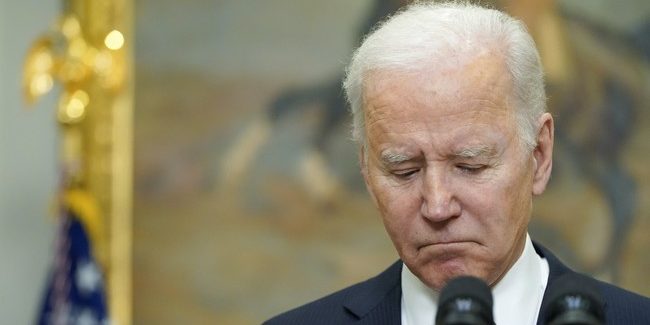 “This is the beginning of a Russian invasion of Ukraine,” Biden said. “I’m going to begin to impose sanctions in response.”

The remarks come less than 24 hours after White House national security officials wavered on the definition of “invasion,” contradicting the position from Biden in January.

“President Biden has been clear with the Russian President: If any Russian military forces move across the Ukrainian border, that’s a renewed invasion, and it will be met with a swift, severe, and united response from the United States and our Allies,” White House Press Secretary Jen Psaki released in a clean up statement on January 19, 2022 after Biden indicated a “minor incursion” into Ukraine was acceptable. “President Biden also knows from long experience that the Russians have an extensive playbook of aggression short of military action, including cyberattacks and paramilitary tactics. And he affirmed today that those acts of Russian aggression will be met with a decisive, reciprocal, and united response.”

In addition, Biden announced new U.S. troop movements and equipment in the NATO countries of Estonia, Latvia and Lithuania. He also braced Americans for consequences at home.

“These are completely defensive moves on our part. We have no interest in fighting Russia,” Biden said.

Biden didn’t take questions from reporters and abruptly left the room after his remarks.