‘It Has Begun:’ Trump Blasts Biden’s Russia Weakness and Warns Americans About What’s Next 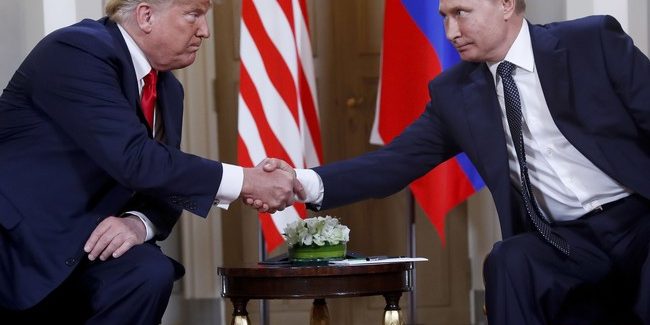 “If properly handled, there was absolutely no reason that the situation currently happening in Ukraine should have happened at all. I know Vladimir Putin very well, and he would have never done during the Trump Administration what he is doing now, no way! Russia has become very very rich during the Biden Administration, with oil prices doubling and soon to be tripling and quadrupling,” Trump released in a statement Tuesday morning.

“The weak sanctions are insignificant relative to taking over a country and a massive piece of strategically located land. Now it has begun, oil prices are going higher and higher, and Putin is not only getting what he always wanted, but getting, because of the oil and gas surge, richer and richer,” he continued. “The U.S. was energy independent under the Trump Administration, an independence that we had never obtained before, and oil prices would have remained low. Now, what a mess our Country is in!”

Trump’s statement came shortly after Deputy Chair of the Russian Federation Security Council Dmitry Medvedev confirmed the NordStream 2 pipeline is being used by Russia as an economic weapon. Biden lifted sanctions on the pipeline put into place by Trump.

Meanwhile, Putin obtained approval to extend his military action beyond Russian borders Tuesday morning, an indication he plans to invade further into Ukraine.