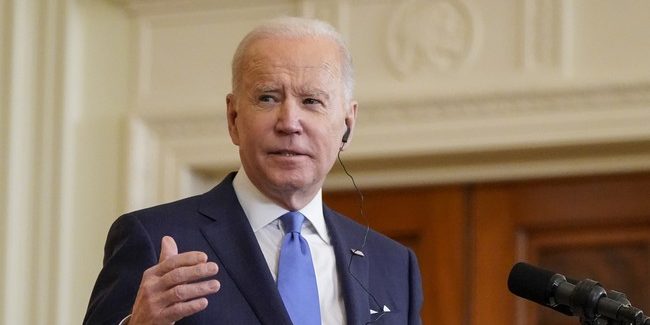 UPDATE: After 12 hours, the White House is changing its tone and calling Putin’s actions an invasion worthy of sanctions, which are being implemented today.

For weeks the Biden White House claimed if Russian President Vladimir Putin were to send troops into Ukraine, invading the sovereign country, that harsh punishment would swiftly follow.

“President Biden has been clear with the Russian President: If any Russian military forces move across the Ukrainian border, that’s a renewed invasion, and it will be met with a swift, severe, and united response from the United States and our Allies,” White House Press Secretary Jen Psaki released in a statement on January 19, 2022. “President Biden also knows from long experience that the Russians have an extensive playbook of aggression short of military action, including cyberattacks and paramilitary tactics. And he affirmed today that those acts of Russian aggression will be met with a decisive, reciprocal, and united response.”

On Monday, Putin gave an address to his country and declared two parts of eastern Ukraine independent territory. He then sent troops to invade the regions, calling them “peacekeepers.”

Now that Putin has made his first move, the Biden administration is shifting the goal posts and arguing his actions don’t meet the invasion threshold.

“We have anticipated a move like this from Russia and are ready to respond immediately. President Biden will soon issue an Executive Order that will prohibit new investment, trade, and financing by U.S. persons to, from, or in the so-called DNR and LNR regions of Ukraine. This E.O. will also provide authority to impose sanctions on any person determined to operate in those areas of Ukraine. The Departments of State and Treasury will have additional details shortly. We will also soon announce additional measures related to today’s blatant violation of Russia’s international commitments,” Psaki released in a statement. “To be clear: these measures are separate from and would be in addition to the swift and severe economic measures we have been preparing in coordination with Allies and partners should Russia further invade Ukraine.”

“We are continuing to closely consult with Allies and partners, including Ukraine, on next steps and on Russia’s ongoing escalation along the border with Ukraine,” the statement continues.