Crisis: More Migrants Released into U.S. Last Month Than Were Deported In All of Fiscal Year 2021 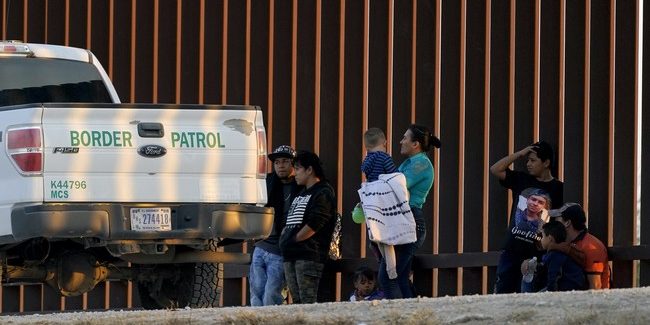 In light of the developing Ukraine crisis, the painful inflation crisis, and various other ongoing crises, President Biden’s border crisis has received relatively scant attention from much of the news media.  The last time the press could be bothered to cover the unfolding disaster at the Southern border in earnest, they had an attractive ‘hook’ as an angle — namely, the Biden administration’s baseless “whips” slander against US Border Patrol agents.  There has been no public resolution to the resulting investigation, which was promised by Biden himself.  His DHS chief vowed that justice would be swift.  But here we are, months later, and the administration still hasn’t produced a report — and is apparently considering never doing so.  The facts don’t reflect well on the president’s defamatory knee-jerk condemnation of American law enforcement officers, after all.  Amazingly, Sec. Mayorkas had the gall to chide some CBP agents’ supposed lack of professionalism after he was given an earful during a recent border trip, while admitting morale has crashed to an all-time low.  Per newly-filed court documents, border encounters ballooned last month, nearly doubling over the level recorded in January 2021:

Recall the rough timeline here: By 2020, President Trump’s administration had started to implement a series of protocols and policies that hugely mitigated the problems at the border.  One year later, Trump had lost the election, and illegal immigration levels started to rise precipitously, with unlawful migrants openly telling US officials and journalists that they decided to make the journey north because Biden was going to adopt a more lenient approach on immigration.  They were right.  Illegal immigration has exploded on Biden’s watch, as the Democratic team in charge of policy has vastly reduced deportations while directly releasing countless illegal immigrants into the United States — actively facilitating their travel to various American cities, in many cases.  The incentives are unmistakable, and the results are both unacceptable and predictable:

U.S. Customs and Border Protection (CBP) released its migrant encounter figure for December, reporting that authorities confronted almost 179,000 people at the U.S.-Mexico border during the month. That takes the total to over 2 million for 2021. This figure represents a historic high, with the total outnumbering the combined number of crossings reported over the past two years by over 565,000, according to CBP data…migrant flows have remained constant throughout the past year. When President Joe Biden took office last January, over 78,000 encounters were reported by authorities. By July, following months of steady increases, a monthly high of nearly 214,000 crossings was reported.

In some of the weakest spin I can recall, online leftists (those who aren’t openly welcoming illegal immigration) have replied to tweets and stories critical of this mess by claiming that the breathtaking increase in encounters is proof that the system is working, or something. See? The borders aren’t open. The Biden administration is doing its job better than ever.  Ignorant and dishonest sophistry.  This talking point requires ignoring the enormous surge in known ‘got-aways’ — illegal immigrants who are detected crossing into US territory but are not stopped.  Officials say at least 400,000 to 600,000 ‘got-aways’ entered the United States last year alone.  That figure doesn’t include undetected illegal entries, nor does it account for the legions of encountered and apprehended unlawful migrants who are subsequent released into the country.

Quote: “More migrants were released into the U.S. in January than were deported by ICE in the entirety of FY 2021 (55,590).” The logistical headache of processing the crush of apprehended migrants renders Border Patrol less capable of enforcing the border, due to strained resources.  There’s a reason why rank-and-file agents are angry.  Meanwhile, the issue of illegal immigration became more personal to my family in the last few days:

As we’ve covered on several occasions, the Biden administration has formally changed the standards for deportation, announcing a litany of crimes (beyond illegal immigration) that are not deportable as a matter of course, even after conviction.  One of those crimes is drunk driving.  I’ll leave you with this: