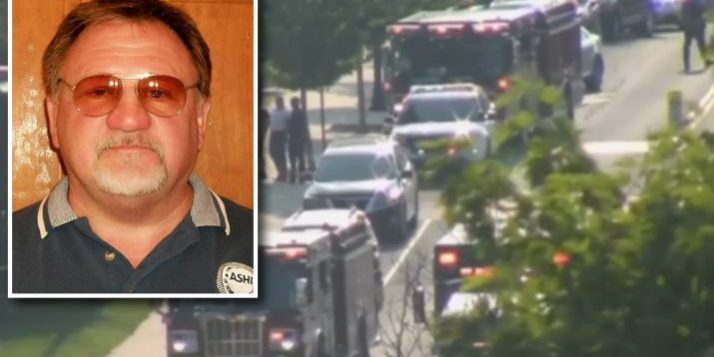 James T. Hodgkinson, the Illinois man identified as the would-be killer who wounded several at a practice session of the Congressional Republican baseball team, had a history of violence, supporting progressive causes, and voting for Democrats at least as far back as the year 2002.

According to the Belleville News-Democrat, a paper from the St. Louis area community in which Hodgkinson lived, the shooter has been identified with particularly progressive and liberal causes. He even worked as a volunteer on the presidential campaign of self-professed socialist Vermont Sen. Bernie Sanders. The suspect’s Twitter feed is also filled with tweets on liberal politics.

The paper reported that Hodgkinson belonged to a Facebook group called “Terminate the Republican Party.”  The shooter’s Facebook page was also linked to a long list of far left-wing groups and pages, including, “Expose Republican Fraud,” “Liberal Democratic Socialist Party,” “Boycott The Republican Party,” “I Hate Donald Trump,” “Healthcare & Education Berners United to Resist Trump,” among others. The now deceased shooter also noted on his Facebook page that MSNBC’s The Rachel Maddow Show was one of his “favorite TV shows.” Facebook has since deleted the dead suspect’s account.

This afternoon, Sen Sanders responded to the fact that the shooter was a member of his own campaign by denouncing the shooting in no uncertain terms. But Hodgkinson had been exhibiting stronger liberal views over the last year. Only a few days ago, Hodgkinson posted an attack against Trump on Facebook, saying, “I Want to Say Mr. President, for being an [expletive] you are Truly the Biggest [expletive] We Have Ever Had in the Oval Office.” The Belleville News-Democrat also reported, “In 2012, Hodgkinson took part in a protest outside the downtown Belleville post office. He said he was part of a “99%” team drawing attention to the amount of money and political power the top 1 percent of Americans acquired.”

Hodgkinson voted Democrat in the 2016 Democratic primary, was described as a “union tradesman,” and was a licensed home inspector.

The shooter also has a history of altercations with the police. According to court records, Hodgkinson was charged with battery and damage to a motor vehicle in April 2006 in St. Clair County, Illinois. Ultimately, the charges were dismissed. The suspect also recently came to the attention of the St. Clair County Sheriff’s office when shots were heard being fired in a local patch of trees. Police found Hodgkinson with a rifle but let him go after finding he had a valid firearm owner’s card (FOID), a requirement for gun owners in Illinois.

According to Rep. Mike Bost, the Illinois Republican who represents the southern Illinois 12th District in which Hodgkinson lived, the suspect was “always angry” and repeatedly called the officers to complain, the Washington Post reported.

“Every issue that we were working on, he was not in support of,” Bost said, saying the communications were of a left-wing slant but were never delivered “with any threats, only anger.”

Illinois Congressman Peter Roskam denounced the shooting. “I am deeply saddened by the shooting this morning in Alexandria, Virginia. Elizabeth and I are praying for Rep. Steve Scalise, the Capitol Police, and all those involved,” Roskam, a Republican, told Breitbart via email. “I wish those harmed a speedy recovery and commend the bravery demonstrated by the Capitol Police and those who tended to the injured. We are fortunate to live among the brave men and women in uniform who serve to keep us safe each and every day.” Congressman Bost also slammed the left’s “political rhetoric” that caused the shooter’s mental breakdown. “With reports indicating that Wednesday morning’s shooter is from my district, this is a tragedy that certainly hits close to home. As we continue to gather information, Tracy and I would like to send our prayers to my friend and colleague, Steve Scalise, as well as members of the security detail and congressional staff who were injured,” Bost said in a statement. “We live in challenging times, and the political rhetoric has been turned up to an alarming level. This should serve as a wake-up call for all of us to step back from the battle lines and come together to strengthen our nation.”

The Illinois GOP did not respond to a request for a statement on the matter.