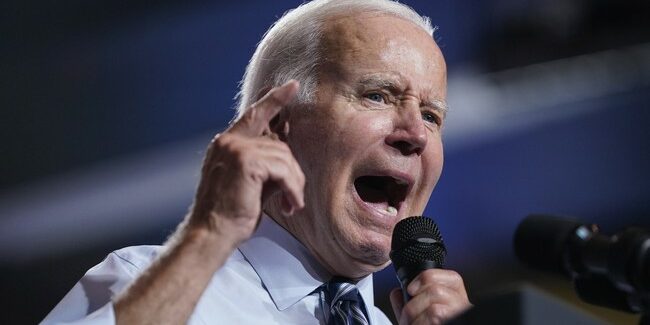 In a brazenly partisan speech delivered in the shadow of Independence Hall in Philadelphia, President Joe Biden had the gall to invoke America’s founding — when bold colonists banded together to declare their independence and fought their way out from the grasp of tyranny — while smearing millions of his fellow citizens as radical, unlawful, and hateful individuals.

Despite insistence from White House — including Press Secretary Karine Jean-Pierre and Chief of Staff Ron Klain — earlier on Thursday that Biden’s address would not be political and not about one political party or one political person, the president directly named “Donald Trump”and repeatedly invoked “MAGA Republicans” in his remarks.

While speaking in front of an ominous-looking Independence Hall illuminated with dim red lighting and flanked by military guards, Biden accused these MAGA Republicans — who he’s recently smeared as “semi-fascists” — of harboring “anger,” spreading “chaos,” and living in the “shadow of lies.”

But then he called for Americans not to “see each other as enemies” as he declared millions of Americans to be, well, enemies of democracy.

The president showed apparent ignorance of what happened at the hands of radical Democrats — during the summer of 2020 and outside the homes of Supreme Court justices in the summer of 2022 — by declaring that violence is unacceptable in America. “This is not who we are,” Biden bellowed despite the fact that Democrats were in fact quite violent in recent memory.

Biden called for Americans to “respect the guardrails of the republic” and invoked the “institutions” created during the drafting of the U.S. Constitution — again apparently forgetting that his party is the one seeking to nuke the U.S. Senate’s legislative filibuster, pack the Supreme Court, and abolish the Electoral College.

“I’m asking every American to join me,” Biden said of his quixotic campaign to defend democracy from the threats he enumerated that have mostly been posed by his own party.

Again dubbing his opposition the “MAGA forces” — a moniker that will not only fail to dissuade people from supporting former President Trump but is likely to have a further steeling effect on his supporters — Biden confusingly also declared that he would leave no American behind in his quest toward the future.

The President Biden who spoke on Thursday was also unrecognizable from who then-candidate Joe Biden made himself out to be while campaigning in 2020.

“We must come together as a nation,” Biden said on the campaign trail. “Too many Americans see our public life not as an arena for mediation of our differences but rather they see it as an occasion for total, unrelenting partisan warfare,” he scolded. “Instead of treating each other’s party as the opposition, we treat them as the enemy,” Biden said of the political environment he sought to take control of and pledged to change. “We must seek not to have our fists clenched but our arms open. We have to seek not to tear each other apart but seek to come together.”

“Let’s just set partisanship aside,” candidate Biden said attempting to appeal to some sort of better angels while ignoring his own political track record. “We must free ourselves” from “forces of division,” Biden declared. “As president, I’ll embrace hope, not fear,” he promised.

But on Thursday, President Biden — the real Biden — was speaking not as a candidate seeking to win over Americans’ votes but as the President of the United States. He now is the commander in chief of the greatest military in the world, the man in charge of the FBI, the CIA, the NSA, and the IRS — and his words are not just his own empty promises, but carry the weight of the federal government and some of the most powerful institutions in the world.