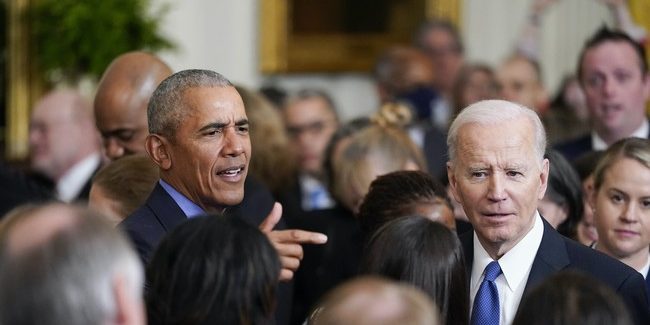 Yesterday President Barack Obama made his way back to the White House to mark the 12th anniversary of Obamacare.  During his opening statement, he referred to current President Joe Biden as the Vice President before making formal remarks.

“It’s wonderful to be back to say thank you to all of you.  But most of all, coming back here gives me a chance to say thank you and spend some time with an extraordinary friend and partner who was by my side for eight years. Joe Biden and I did a lot together,” Obama said. “So when President Biden said he was not going to just celebrate the ACA, but also announce actions that would make it even better, I had to show up.”

“Mr. President, welcome back to the White House, man. It feels like the good old days,” Biden said following Obama’s remarks at the lectern before signing an executive order. “I have to admit one thing I haven’t gotten down. Barack Obama could sign his name using nine different pens. But I’m going to use one.”

After remarks, Biden appeared to be lost.

After rejoining the group where Obama worked the crowd, Biden was ignored as he yelled and reached for him.

Unlike most presidents who leave town after their term, Obama still lives in Washington D.C.