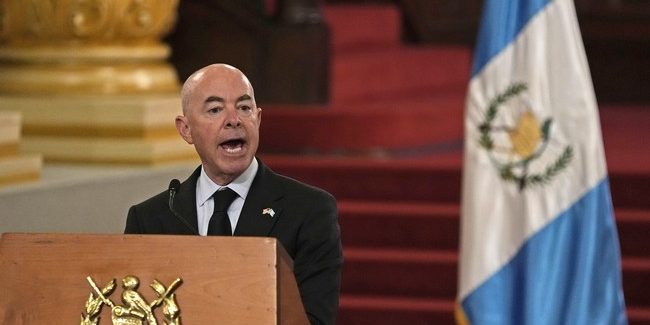 The Heritage Foundation’s new president and its homeland security team are calling for Department of Homeland Security (DHS) Secretary Alejandro Mayorkas to be impeached by Republicans if he will not step down due to his terrible handling of the ongoing crisis at the U.S.-Mexico border.

The think tank is the latest conservative heavyweight to call for impeachment as Rep. Chip Roy (R-TX) says he will lead the charge of impeaching Mayorkas if Republicans take back Congress in the upcoming midterms. It also comes after Mayorkas’ disastrous meetings with Border Patrol agents stationed at the southern border, where agents vented their frustrations at the Biden administration’s open border policies and they leaked audio and video of the tense meetings to the media.

In addition to the high number of illegal crossings agents have had to deal with in 2021, they were frustrated they have been unable to arrest hardened criminals and seize drugs, like fentanyl, because they are often bogged down with processing family units and children who willingly gave themselves up.

“The homeland security secretary has no greater charge than defending the American homeland. Secretary Mayorkas has utterly failed this most basic responsibility. Worse, he has actively undermined our national security, and encouraged and facilitated the violation of the very laws he swore to uphold,” said Heritage Foundation President Kevin Roberts.

“He has presided over the worst border crisis in American history, actively contributing to it by implementing the White House’s open-borders policies. Under his leadership, record numbers of narcotics have flowed across our border to devastate lives in our communities,” he continued. “It is time for him to go—for the good of the men and women of DHS law enforcement, the American people, and our national sovereignty. If he refuses to do so, the next Congress should move forward with his impeachment.”

Mark Morgan, former acting U.S. Customs and Border Protection commissioner and Heritage visiting fellow, said Mayorkas has “lost the trust and confidence of the men and women of DHS law enforcement…I continue to speak with our frontline agents, and their anger, exhaustion, and frustration with this secretary are apparent. He has not only destroyed the most secure border in our lifetime—he has repeatedly lied to the America people about the cascading impacts to our country’s public safety, health, and national security.”

“This is no longer just about simple disagreement on policy. Mayorkas and his bosses have intentionally undermined the sovereign interests of the United States by embracing these policies—policies they were warned would result in disaster. As DHS secretary, Mayorkas bears responsibility for this catastrophic failure. He was the wrong man for the job from the beginning. He needs to step down now—or be made to,” said James Carafano, Heritage vice president for national security and foreign policy. Lora Ries, Heritage senior research fellow and former DHS acting deputy chief of staff, said Mayorkas knows the “root causes” of the historic and continued surge in illegal crossings is not “the pandemic, or the policies of the previous administration. The problem is his boss’ open-borders policies—policies he has readily and willingly implemented. They have cut this path of destruction in just one year. It does not bear thinking how much more damage Biden, Harris, and Mayorkas could cause to our sovereignty and to our border in the next three years.”