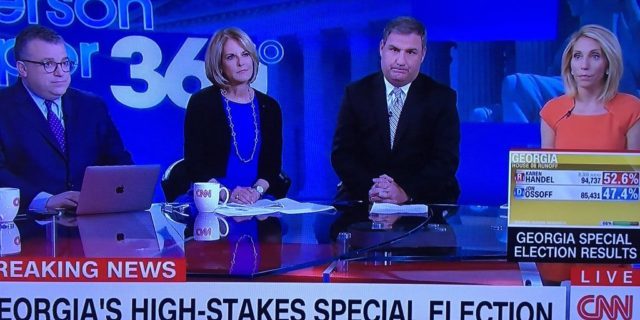 CNN cut away from Karen Handel’s victory speech after the Republican won the special election in Georgia’s 6th congressional district on Tuesday night, just as she was about to begin describing the issues that defined her agenda.

A few minutes earlier, CNN had aired the speech of Democrat Jon Ossoff until it ended. Ossoff was expected to win by most observers, and carried the hopes of the so-called “#Resistance,” which hoped that Tuesday would mark the beginning of the end of the GOP majority in the House of Representatives and of President Donald Trump himself.

On social media, conservatives mocked the downcast faces of CNN’s political journalists, analysts and contributors as they struggled to digest yet another disappointment. Handel’s victory was just the latest in a long string of special elections that the Democrats had expected to win, and it was the one district they felt was well within their grasp. It proved too much for CNN’s Don Lemon, who evidently could not bear to hear Handel explain to him and to CNN’s audience exactly why it was that she had won, and what issues her voters cared about when they went to the polls.

There was no breaking news elsewhere that demanded attention. CNN merely cut back to a group of talking heads. CNN has taken a defiantly oppositional posture since Trump won the November election. It has focused obsessively on the Russia conspiracy theory, to the exclusion of coverage about what the Trump administration is actually doing and what voters really care about. It would rather censor than cover the news, and Tuesday night was no exception.