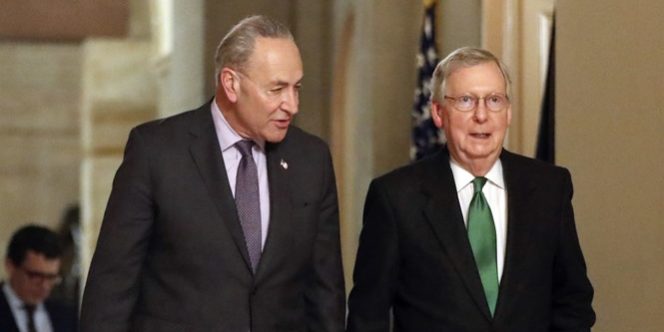 Sens. Mitch McConnell (R-KY) and Chuck Schumer (D-NY) may be patting themselves on the back for brokering a compromise on the budget Wednesday, but conservative groups are not impressed with its contents. The deal would add $500 billion in federal spending – for both defense and non-defense spending.

Conservatives lawmakers and organizations are decrying the agreement as fiscally irresponsible. “This spending bill is a debt junkie’s dream,” said Rep. Mo Brooks (R-AL). “I’m not only a no, I’m a hell no.” Club for Growth is urging all members of Congress to vote no on this Big Government budget.

“In 2011, when Congress passed The Budget Control Act (BCA), Senate GOP Leader Mitch McConnell praised the deal, proclaiming that the ‘big government freight train’ was slowing down,” the group wrote in a press release Wednesday. “Well, now that the BCA spending caps are busted under this deal yet again, it’s clear that McConnell and the GOP establishment want to speed up the big government freight train with the help of big spending liberals on the other side of the aisle.

“As if that’s not bad enough, this deal also includes $80+ billion in so-called disaster relief spending, cronyist tax extenders, an expansion of farm subsidies, and another suspension in the debt ceiling, conveniently timed to expire after the mid-term elections. Nowhere in this deal are the $54 billion in spending cuts outlined in President Trump’s budget. Instead, the big government freight train is running out of control.” Tea Party Patriots Citizens Fund agreed and published their own strongly worded response. McConnell and his colleagues need to slowly back away from Schumer, they warned.

“When will our so-called ‘Republican leaders’ ever learn to stick by their promises and previous statements?” Chairman Jenny Beth Martin said. “Republicans in Congress should step away from Chuck Schumer’s negotiating table and work to pass a budget that balances by making tough choices and eliminates our more than $20 trillion in debt. Anything less would be an abandonment of their promises to the American people.” The spending deal has plenty for liberals to frown at too. It does not include DACA protections, despite it being the Democrats’ loudest, most passionate issue for the last several weeks – one that even caused a government shutdown. House Minority Leader Nancy Pelosi spent eight hours demanding DACA protections on the House floor today, for crying out loud. It broke a record and is now the longest-continuous speech in House history.

President Trump, however, is pleased with the deal the Senate struck.