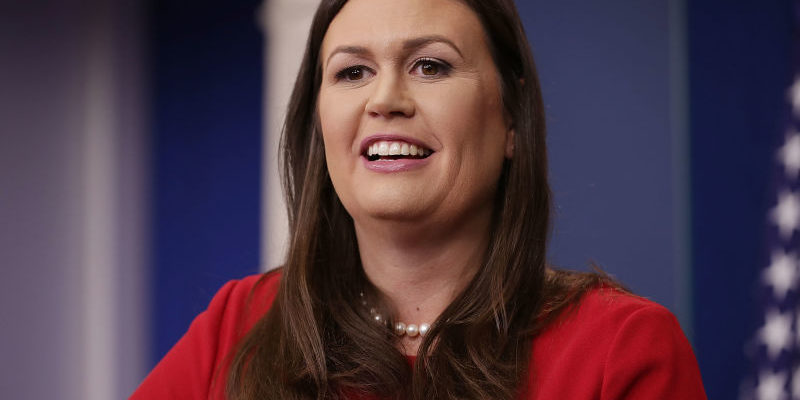 The White House Correspondents’ Association distanced itself late Sunday from comedian Michelle Wolf after her comedy routine on Saturday that some found vulgar and personal. “Last night’s program was meant to offer a unifying message about our common commitment to a vigorous and free press while honoring civility, great reporting and scholarship winners, not to divide people,” Margaret Taley, the WHCA president, said in a statement. “Unfortunately, the entertainer’s monologue was not in the spirit of that mission.”

The backlash against the correspondents’ dinner was prompted over Wolf’s profanity-laced routine that targeted White House Press Secretary Sarah Huckabee Sanders. “I actually really like Sarah. I think she’s very resourceful,” the former “Daily Show” writer said. “She burns facts and then she uses that ash to create a perfect smoky eye. Maybe she’s born with it, maybe it’s lies. It’s probably lies.”

President Trump on Monday tweeted that the annual dinner is now “DEAD as we know it.”

The WHCA president, who’s also a reporter for Bloomberg News, said members of the association expressed “dismay” and concern how Wolf’s routine at the event “reflects on our mission.” Talev added that the association is “committed to hearing from members on your views on the format of the dinner going forward.” The WHCA statement echoes President Trump’s criticism of the event, which he didn’t attend and instead held a rally in Michigan, calling the annual gala “a very big, boring bust.” Trump reiterated his views following the WHCA statement, tweeting: “The White House Correspondents’ Dinner was a failure last year, but this year was an embarrassment to everyone associated with it. The filthy ‘comedian’ totally bombed (couldn’t even deliver her lines-much like the Seth Meyers weak performance). Put Dinner to rest, or start over!”

The jokes were also criticized by prominent journalists, with New York Times reporter Maggie Haberman praising the press secretary for not walking out amid attacks on her physical appearance. “That @PressSec sat and absorbed intense criticism of her physical appearance, her job performance, and so forth, instead of walking out, on national television, was impressive.”

“Morning Joe” co-host Mika Brzezinski called the jokes on Sanders “deplorable” and said the association owes Sanders an apology. “Watching a wife and mother be humiliated on national television for her looks is deplorable. I have experienced insults about my appearance from the president. All women have a duty to unite when these attacks happen and the WHCA owes Sarah an apology,” she tweeted. Wolf has since pushed back against the criticism, saying she didn’t mock Sanders’ appearance and joked about her “despicable behavior.”

“Why are you guys making this about Sarah’s looks? I said she burns facts and uses the ash to create a *perfect* smoky eye. I complimented her eye makeup and her ingenuity of materials,” Wolf tweeted.