Cruz Fails to Endorse Trump in RNC Speech & Gets Booed! 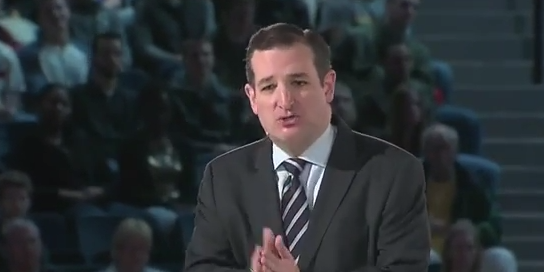 In the most electric moment of the convention, boos and jeers broke out as it became clear that Mr. Cruz — in a prime-time address from center stage — was not going to endorse Mr. Trump. It was a pointed snub on the eve of Mr. Trump’s formal acceptance speech.

As hundreds of delegates chanted “Vote for Trump!” and “Say it!” Mr. Cruz tried to dismiss the outburst as “enthusiasm of the New York delegation” — only to have Mr. Trump himself suddenly appear in the back of the convention hall. Virtually every head in the room seemed to turn from Mr. Cruz to Mr. Trump, who was stone-faced and clearly angry as he egged on delegates by pumping his fist.

Mr. Cruz was all but drowned out as he asked for God’s blessing on the country and left the stage, while security personnel escorted his wife, Heidi, out of the hall. One delegate yelled “Goldman Sachs!” at her — a reference to the company that has employed her, a job that Mr. Trump attacked during the primaries.

A short while later, Mr. Cruz faced insults as he made his way down a corridor — one woman yelled “Traitor!” When he tried to enter the convention suite of the Las Vegas casino magnate Sheldon Adelson, he was turned away.

The commotion on the night that Gov. Mike Pence of Indiana, Mr. Trump’s running mate, later gave a well-received speech, was a jarring demonstration of just how divided Republicans remain and a stunning departure from modern political conventions. The uproar over Mr. Cruz’s refusal to endorse Mr. Trump recalled an earlier political era, such as when the moderate Republican Nelson Rockefeller was heckled for using his speech at the 1964 convention to criticize Barry Goldwater, the party’s nominee that year.