Cleveland — Cleveland police on Wednesday made 18 arrests and reported that two officers had been assaulted after a protester attempted to light an American flag on fire outside the security barrier surrounding the Republican National Convention, authorities said.

Upward of 200 law enforcement officers from dozens of departments, joined by Cleveland Police Chief Calvin Williams, converged on the scene, confronting a small group of demonstrators in what quickly escalated into the most heated clash in a mostly subdued week of protests.

“You’re on fire! You’re on fire, stupid,” an officer could be heard yelling when the man who tried to start the blaze had his leg briefly catch fire.

He was then arrested for assaulting an officer, Williams said during an evening news conference, after trying to bat away police seeking to douse the flames.

The man was a member of the Revolutionary Communist Party and wore a shirt that read “Revolution – Nothing Less” in Spanish.

He was arrested for assaulting an officer, Williams said during an evening news conference, after trying to bat away police seeking to douse the flames.

Hours after dispersing the crowd, Cleveland police tweeted that the officers had been punched and pushed during the brief melee.

Their injuries were described as minor. Charges against those arrested included felonious assault on a police officer, failure to disperse and resisting arrest.

In a joint statement released Wednesday night, Williams and Cleveland Mayor Frank Jackson said 18 arrests had been made over the course of the day.

More than a dozen protesters and Donald Trump supporters had said that a group planned to burn a US flag, and officers and medics with fire extinguishers stood at the ready a block away on Euclid and E. 4th Street in the minutes before the incident kicked off.

Cleveland police denied accusations by protesters and witnesses that they used pepper spray, saying it was actually water.

Police initially moved in on foot and then horseback to secure the intersection outside the Quicken Loans Arena, where the convention is being held, temporarily blocking access into the secure zone. A number of “Bikers for Trump” moved through the throngs, escorting a Republican delegate in the direction of her hotel while a man with a loudspeaker taunted anti-Trump protesters, one of whom was yelling, “America was never great.”

“At a protest today, exit routes from protests were blocked by police or appeared impassable for people with disabilities, and dispersal orders were not clearly audible to all protesters,” Amnesty International USA’s Eric Ferrero said late Wednesday. The multinational group has a delegation of human rights observers in Cleveland for the convention.

The Ohio chapter of the National Lawyers Guild was also critical of the police action, saying in a statement they are “highly concerned about these arrests and the escalation of police tactics against peaceful demonstrators.”

Before Wednesday’s confrontation, only five people had been arrested during the convention’s first two days.

That number is now 23. Protests on Tuesday in nearby Public Square had attracted hundreds of police but no one was detained. 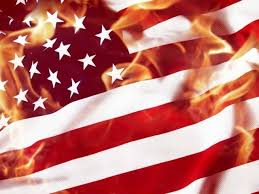