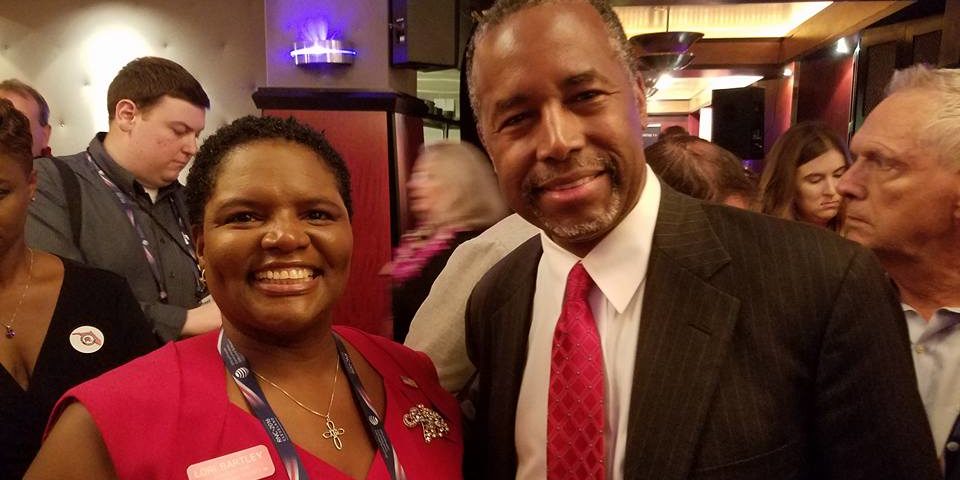 Recently, House Speaker Paul Ryan was  vilified for a Facebook posting of a  picture of  himself and a large room full of very white 2016 White House Republican Interns. This very illustration of the left’s narrative was a moment to take a closer look.

The left pounces on the GOP for being white, racist & exclusive. Yet, the latest growing wave of Black Conservatives belies such accusations. We see more and more African American conservatives on the national and local stage . For example, Houston Republican Lori Bartley ( pictured with Dr. Ben Carson at 2016 RNC) is taking on long-time African American Congresswoman Sheila Jackson Lee in Houston’s Congressional  District 18.

“I have witnessed the breakdown of the American family and a lack of hope and brokenness amongst the people of District 18, my family.  Therefore, I felt a sense of responsibility to help bring the American Dream back to the 18th Congressional District for those who feel it is slipping away or have given up dreaming altogether. District 18 has been ignored for over 20 years and we, who had so little before, have even less now.”

More and, African Americans are stepping out of the shadows and declaring the failed policies of the left are a threat to their prosperity, families and faith principles.  A close friend of mine, a 60-year old African American woman is a conservative and says she has faced great persecution among her  black peers and she prefers to keep her politics to herself.

While the 2012 Republican Autopsy Report outlined the dire need for more inclusion of minority groups, as a contributing factor for their losses, national polls still show minorities still make up a small portion of the GOP. The larger question is just how much that will bear out with how independent minorities voters cast their votes for or against Donald Trump in November.

Are the polls biased? Is there a much larger closeted black conservative population or is just time for the GOP to really get serious about greater diversity?