Desperate Demagogue: Those Who Oppose My Elections Power Grab Are ‘Domestic Enemies’ 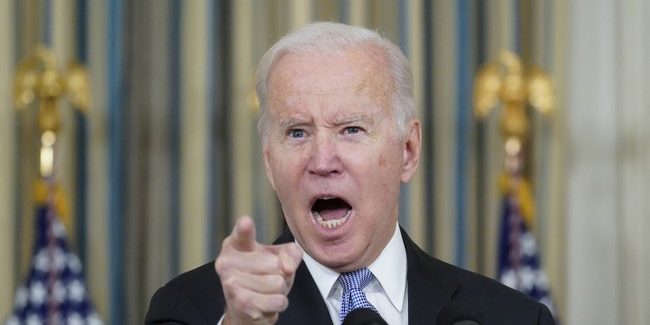 One more post on that nasty, mendacious speech delivered by a desperate, shrinking president.  Mitt Romney made some strong points in rebuttal on Tuesday, and we followed up with a few additional arguments yesterday.  But we haven’t tackled this soundbyte yet, which was among the ugliest and laziest lines in the president’s extended expression of performative, impotent rage.  President Unity is really on a roll:

He’s framing opponents of his scheme to repeal state laws and impose a partisan federal takeover of elections as not only segregationists, but also domestic enemies.  A lot of people were disturbed by the previous president labeling journalists the ‘enemy of the people.’  Here’s the guy who won on healing and normalcy slandering a majority of Americans (large majorities oppose things like eliminating photo ID and mandating ballot harvesting), and at least 52 US Senators, as enemies of the country.  Did the erstwhile rhetoric hand-wringers bat an eye?  Despite all his talk about reaching across the aisle, having cited cooperation and decency as part of his governing mandate, it’s not surprising to see Cranky Joe casually smearing the entire Republican Party.  If he was willing to tell a room full of black voters that Mitt Romney and Paul Ryan wanted to re-enslave them, he’ll say anything.  But tarring holdout Democrats — members of his own party, whose votes he needs on literally everything?  That’s a bold move.
What struck me about the ‘domestic enemies’ calumny is that Biden’s words and tone were much harsher than anything I can recall him saying about the Taliban, terrorists who murder Americans, brutalize dissidents, execute gays, and subjugate women and girls.  During his disgraceful Afghanistan withdrawal, Biden’s shambolic retreat featured a reliance on the Taliban, so maybe he felt compelled to keep any would-be barbs to himself — even after their “security” operation (run by a wanted terrorist) surrendered a deadly attack that killed 13 Americans.  In response, the Biden administration accidentally droned some innocent kids to death, and the president fled to the beach as that grave error was publicly revealed.  After all, he’d already abandoned thousands of Americans to the terrorist regime, breaking his word.  Perhaps his team’s mentality was that it would be best to cut his losses and hunker down.

But on this, he’s all riled up.  Biden is evincing much, much more anger that a majority of United States Senators won’t go along with a radical plan to blow up Senate rules in order to facilitate a 50/50 nominal Democratic majority unilaterally re-writing the whole county’s election laws, all based on a phony “crisis” related to “voting rights.”  Most Americans are perfectly comfortable with recalibrating our elections processes to pre-pandemic norms, which does not qualify as “voter suppression” — even in places like Delaware and New York, where the “suppression” has been strangely inoffensive to Biden for decades:

In states like Georgia and Texas, the president’s designated bogeymen, lawmakers reverted back to pre-emergency rules, while incorporating some expansions of voting options, relative to the status quo prior to the pandemic.  That’s a mainstream, reasonable course of action.  Or as Biden would call it, literally worse than Jim Crow.  Fascinatingly, the pioneer of the ‘Jim Crow 2.0’ lie — a woman famous and indeed celebrated for her election lies — “couldn’t make it” to the Biden/Harris tantrum this week.  Stacey Abrams had the President and Vice President of the United States, members of her party, in her state, addressing her signature “issue” …and she couldn’t be bothered to show up.  Scheduling conflict, you see.  Unless it was her own wedding or the funeral of a close relative (we have no indication it was anything of the sort), I cannot imagine what possibly could have stood in the way of her attendance.  The likelier truth is that Abrams didn’t want to cross leftist activists who were boycotting the event and didn’t want to be too closely associated with a president who is unpopular in the state in which she’s trying to win the governorship.  Odds are, her no-show was a self-interested political calculation, and it made Biden’s dumb, dishonest table-pounding look even weaker.

I’ll leave you with a GOP strategist marveling at Biden choosing to expend evaporating political capital on this base-placation exercise.  Which seems destined to fail.  Which, in turn, will only inflame the base’s dissatisfaction.  Galaxy brain stuff.  Americans do not generally view the right and ability to vote as under genuine threat.  They’re more worried about rising prices, various shortages, and other hardships.  And yet:

This juxtaposition is jarring. What a fraud his unity/decency/cooperation pledge was: