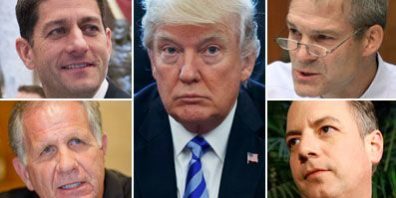 The week began with fierce finger-pointing in Washington in the wake of Friday’s flameout of the GOP alternative to ObamaCare, with conservatives and moderates blaming each other, President Trump sending mixed signals as to he faulted and Democrats gloating over the law’s preservation. Opposition from the House Freedom Caucus, the powerful bloc of conservative Republicans, prompted Speaker Paul Ryan to pull the bill prior to a scheduled vote, but members said it should spur a fresh approach instead of recriminations. “Instead of doing the blame game, let’s get to work,” Rep. Jim Jordan, R-Ohio, said on “Fox News Sunday.” “Let’s do the responsible thing. Let’s get back to work and do what we told the voters we were going to do.”

Trump, who has had an on-again, off-again relationship with Ryan, initially seemed let down by the speaker’s inability to deliver the votes for a bill Trump had supported. The president sparked speculation he was gunning for Ryan when he tweeted Saturday morning for people to watch Fox News’ “Justice with Judge Jeanine,” which then featured a blistering monologuefrom host Jeanine Pirro calling for Ryan’s ouster. “Americans elected the one man they believed could do it,” Pirro said. “And, Speaker Ryan, you come in will all your swagger and experience and sell him a bill of goods which ends up a complete and total failure.” But a day later, Trump tweeted that it was the Freedom Caucus and conservative think tanks that had killed the bill and left ObamaCare in place.  “Democrats are smiling in D.C. that the Freedom Caucus, with the help of Club For Growth and Heritage, have saved Planned Parenthood & Ocare!” Trump tweeted.

On Sunday, Trump Chief of Staff Reince Priebus seemed to elaborate on his boss’ comments directing blame at House conservatives. “I think the president is disappointed in the number of people he thought were loyal to him that weren’t,” Priebus said. The administration kept hope alive that another alternative could be in the works, when Vice President Mike Pence declared Trump has not abandoned the idea of repealing and replacing ObamaCare. “West Virginia and President Trump, we all know the truth about this failed law, that every day ObamaCare survives is another day that America suffers,” Pence told a crowd gathered Saturday at a Charleston construction supply company.

The Republican infighting extended to Freedom Caucus circles, where one member of the approximately 40-member group, Texas Congressman Ted Poe, quit over what he characterized as the group’s ever-changing demands of Ryan.

“To deliver on the conservative agenda we have promised the American people for eight years, we must come together to find solutions  to move this country forward,” Poe said Sunday through his congressional office. “Saying no is easy, leading is hard, but that is what we were elected to do. Leaving this caucus will allow me to be a more effective member of Congress and advocate for the people of Texas. It is time to lead.”

In the Senate, critics of the bill, including Tom Cotton of Arkansas, said Ryan’s leadership team moved too fast and failed to build consensus on the bill. Sen. Rand Paul, R-Ky., a physician, also has been a vocal critic of the House bill and it was not clear that the Trump-backed plan would have passed in the Senate.

Democrats were giddy over the Republicans’ failure, mocking them for the self-inflicted wound. “Hey Republicans, don’t worry, that burn is covered under the Affordable Care Act,” tweeted Sen. Robert Menendez, D- N.J.