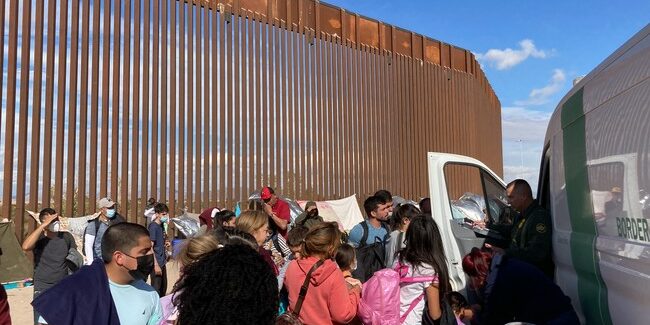 Democrats in disarray is nothing new, but the level of frustrations between President Biden and his own officials at the Department of Homeland Security are apparently hitting new highs over his refusal to act on the crisis at the U.S.-Mexico border.

This revelation comes from, of all places, NBC News reporting based on conversations with nameless “officials” who are growing tired of the Biden administration’s “nothing to see here” attitude toward the ever-worsening illegal immigration crisis stemming from the unsecured southern border.

Evidently, after the White House hosted “a series of high-level meetings on immigration” that allowed Biden’s DHS officials to present options “including flying migrants to the country’s northern border with Canada,” there are “some DHS officials” who “have openly expressed frustration at those meetings.”

That frustration stems from, according to these officials and internal communications obtained by NBC News, “the White House’s reluctance to take a page from the book of Republican governors and begin transporting migrants to cities within the U.S.” Huh. How about that. The same action called “racist” and compared to Nazi tactics on MSNBC’s air is actually what Biden’s own administration is urging the president to do.

The Department of Homeland Security — with personnel already stretched beyond the breaking point and unable to do the actual work of securing the homeland’s southern border — is again ringing the alarm bells at the White House because “the number of migrants crossing the U.S.-Mexico border is nearing 8,000 per day,” according to NBC News.

Not only is that an insane amount of illegal immigrants pouring into the country, but “White House officials have previously set 9,000 per day as an internal trigger to begin what they refer to as ‘interior processing,’ where migrants are flown or bused from the border to interior cities.” Oh, so the Biden administration had already talked about plans to do what it’s now attacking Ron DeSantis and Greg Abbott for doing. Of course.

According to the interview and documents NBC News’ report is based on, the Biden administration is currently in the midst of botching yet another piece of its response to the border crisis:

DHS officials have advocated that the administration should start securing planes and planning for interior processing now, according to documents obtained by NBC News.

So all this chaos at the border and behind the scenes at the White House is taking place at the same time Democrat media surrogates are wasting their breath and mainstream media airtime to attack Republicans for doing more or less what DHS wanted to do all along. At the same time, the Biden administration — from Karine Jean-Pierre to Joe Biden to Kamala Harris to Alejandro Mayorkas — has been insisting the border is “secure,” there’s no crisis, and everything is running smoothly.

Perhaps the most damning indictment of the White House’s latest mucking-up of the border crisis is the fact that the White House did not even bother trying to respond to NBC News’ request for comment on their report.