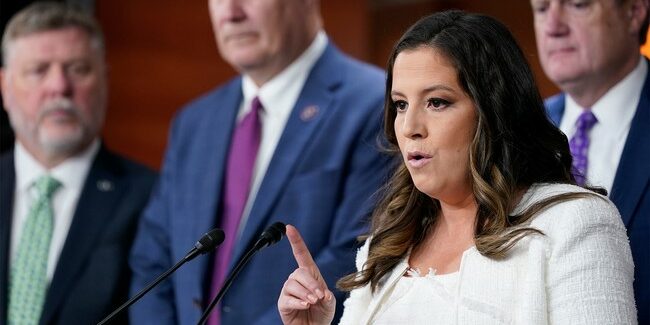 We’re now about a month and a half away from the midterms, and while Republicans are still predicted to win control of the House, forecasters have changed their tune, at least somewhat, in order to downplay their chances. That hasn’t deterred Republican leadership, though. During a Wednesday roundtable highlighting the successes of E-PAC, Rep. Elise Stefanik (R-NY), who also chairs the House Republican Conference, remained confident that chances for her party look good.

Republicans only need to win five seats to win back the majority, which is certainly doable, given that the president’s party almost always loses seats during his first midterm, with an average of 28 seats. If Republicans win 35, they would have their greatest majority since the Great Depression.

While taking a question from Townhall, Stefanik emphasized her belief that this is possible. “Do I think we have the opportunity to earn that historic majority of 35 seats? I do. I’ve always thought that this cycle and I feel that in terms of when I talk to not only my voters, but voters across the country,” she said.

Such wins would be historic in other monumental ways, too. If every E-PAC endorsed candidate were to win on election night, there would be more than 50 Republican women in the 118th Congress. Stefanik started E-PAC after the 2018 midterms, when there were only 13 Republican women in the House. Stefanik believes that there could be 40 Republican women come the next Congress.  As she went through highlighting various candidates, Stefanik also pointed to women running in more Democratic districts, especially in places like New York where Liz Joy is running, and New Jersey where Sue Kiley is running. Stefanik predicted there could be wins there too, especially if it’s a “big” night for Republicans.

Even before any votes are counted, Republican women have already made history, as 298 of them had filed for this Congress, breaking previous records. That number was highlighted in July of last year, when it was at 127, and just kept growing.

Averages, such as from RealClearPoltiics and FiveThirtyEight, currently have Democrats slightly favored on the generic ballot, by 1.3 percent and 1.7 percent, respectively. Numerous polls also show, though, that Republicans have a lead when it comes to the issues that matter most, such as those to do with economic issues, like inflation. Polls have also been wrong in previous cycles. Stefanik raised all of these points when addressing what forecasters have been saying.

Although Democrats still maintained control of the House in 2020, their numbers were very slim, especially compared to what was predicted.

“I remember on Election Night in 2020, when people said Nancy Pelosi would pick up 15 seats, well, Republicans picked up 15 seats, and that was despite the media and prognosticators’ expectations,” Stefanik added. She went on to note “we’ve seen the polling” and pointed out that Democrats are running scared.

It’s particularly worth highlighting that it’s not merely Stefanik saying so. Earlier this week, Nate Cohn acknowledged there are trust issues with polling in a piece for The New York Times titled “Perfectly Reasonable Question: Can We Trust the Polls?”