Fauci Mocked Mask-Wearers: ‘Laughing Privately at the Americans He Was Fooling’ 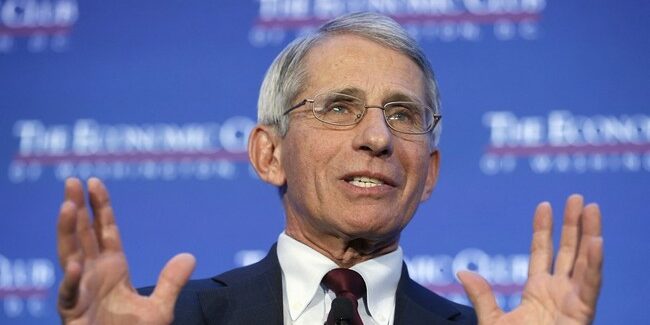 Remember when Dr. Anthony Fauci went on every news channel wearing a mask telling Americans that the Coronavirus was basically a flesh-eating disease and if you went outside to live a normal life your going to be doomed?

Well apparently Fauci himself didn’t even buy his own words.

“[I]n January 2020, [Fauci] said the virus was nothing to worry about for the American people. Then in the months that followed, he said that people should not wear masks and that they were ineffective. By June or July, he had changed his tune and said everyone should be very concerned and that they should wear multiple masks and goggles,” the book said.

Titled Vignettes & Vinos, Morgenstern called Fauci “awful” and an “egomaniac,” detailing how he would mock people who strapped masks to their faces.

“I vividly recall my blood boiling during an infuriating meeting in the Roosevelt Room of the White House, when Fauci laughed about his own goggles comment, making it clear how cynical he was and that he could get people to believe anything,” Morgenstern wrote, adding “he went on to laugh about how ‘ass-backwards’ it was that people entered a restaurant wearing a mask,  then sat down and conversed with people without a mask. Of course, he wasn’t saying things to that effect publicly, just laughing privately at the American rubes he was fooling.”

Fauci proved to contradict and play political games with Americans as the Left realized just how far they can instill fear into the country.

f 2020, Fauci declared that it was unnecessary to be wearing a mask. However flash forward a year, he claimed that wearing not one, but two masks is more effective to fighting off Covid.  The 81 year-old “doctor” who, let us not forget funded the study of Coronavirus’s in Wuhan, allegedly laughed at his own goggles remarks but then went on to tell ABC News that “if you have goggles or an eye shield, you should use it.”

Hypocritical Fauci, who makes more money than the president, is set to retire in December after 38 years as the director of the National Institute of Allergy and Infectious Diseases.