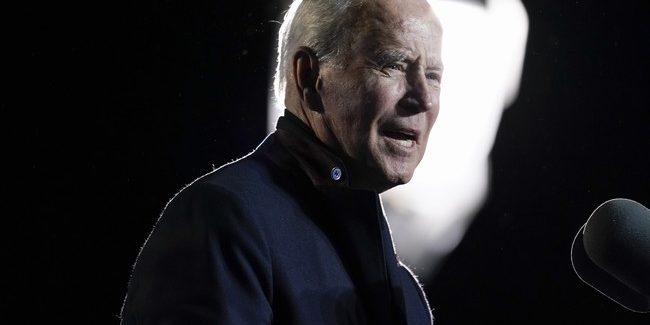 President Biden on Sunday was asked about the administration’s plan to pay illegal immigrants who had been separated from their families under the Trump administration $450,000 per person. Instead of responding, Biden just scratched his head.

“Mr. President, is it true we’re going to give $450,000 to border crossers who are separated?” Fox News’s Peter Doocy asked the president as he rode down an escalator at the G20 summit.

Instead of responding, Biden gave a blank stare and scratched his head.

WOW: Asked if the administration is planning to offer illegal immigrants $450,000 for breaking the law, Biden just stares confusedly at @pdoocy, refusing to answer. pic.twitter.com/moIeHhXdd8

According to The Wall Street Journal, the payments could total near $1 million per family, which has caused backlash, with critics pointing out that under the plan, illegal immigrants would be entitled to more compensation than some Gold Star families and families of 9/11 victims.

Biden wants to pay illegal immigrants $450,000 for their hardship while breaking our laws.

For perspective, if a service member is killed in action, their next of kin gets an insurance payment of $400,000.

Let that sink in. https://t.co/J3kuhDhyD5

The plan will also incentivize more illegal immigrants to come, others argued.

It is almost as if they are looking for ways to exacerbate the #BidenBorderCrisis.

(Of course bad to separate families..but if Biden thinks he has a border problem now,wait until this program starts and word gets out you get this money if you come) Why the Biden administration would pay as much as $450,000 to separated immigrant families https://t.co/wwXvuj3Mp9