If Pelosi Doesn’t Take Action Against Maxine Waters, McCarthy Promises He Will 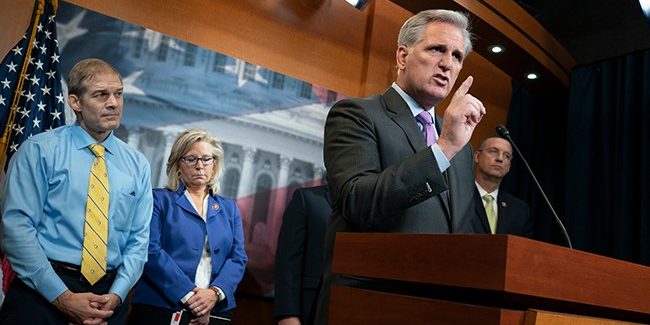 House Minority Leader Kevin McCarthy called on House Speaker Nancy Pelosi to take action against Rep. Maxine Waters over comments she made “inciting violence,” vowing to take matters into his own hands if she doesn’t.

“Maxine Waters is inciting violence in Minneapolis — just as she has incited it in the past,” McCarthy said in a statement. “If Speaker Pelosi doesn’t act against this dangerous rhetoric, I will bring action this week.”

Waters had called for riots in Brooklyn Center, Minnesota, to continue in the wake of a police shooting that killed Daunte Wright. The officer had believed she was using her taser rather than her service weapon. The California Democrat’s comments also come days before a verdict will be reached in ex-police officer Derek Chauvin’s trial over the death of George Floyd. As Rebecca reported on Sunday, hours after Waters’ comments, the Minnesota National Guardsmen security team was fired at, injuring two guardsmen.

“We’re looking for a guilty verdict. We’re looking for a guilty verdict. And we’re looking to see if all of this [inaudible] that took place and has been taking place after they saw what happened to George Floyd,” Waters said. “If nothing does not happen, then we know, that we’ve got to not only stay in the street, but we’ve got to fight for justice, but I am very hopefully and I hope that we’re going to get a verdict that will say guilty, guilty, guilty. And if we don’t, we cannot go away.”

If Chauvin is not convicted, Waters urged protesters to “stay on the street.”