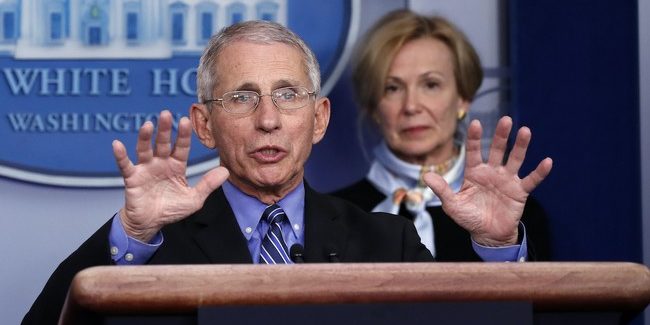 Dr. Anthony Fauci got a beating this week. Sen. Rand Paul (R-KY) delivered the first one in March, but it was Rep. Jim Jordan’s (R-OH) turn. On April 15, Fauci was at a hearing for the House Select Committee on the Coronavirus and was asked a simple question. One that is on the minds of millions of Americans: when do we get our freedoms back? What are the metrics? He didn’t give any, not really. It’s when the infection levels drop to safe levels. Okay, what are those, doc?

Jordan aptly noted how First Amendment rights and a slew of others have been curtailed for over a year. The feisty Ohio Republican aptly noted that the Constitution isn’t suspended just because there is a pandemic. Fauci said he doesn’t view this as a liberty or freedom issue, but one of public health. He also said that goal is to get as many people vaccinated, and that the rate of infection is still too high to loosen things up right now. he also tossed out the false narrative that we’re at risk of another surge. We’re not. Even Nate Silver has noted that the surge talk is debatable at best. Second, Fauci even said a fourth wave is probably not going to happen because the vaccination rates are moving forward quite strongly.

The best part is when Fauci said his advice is based on the CDC guidelines. In other words, he’s following the science, right? The folks who tell us to get vaccinated but stay inside because we’re not…really vaccinated. Get the shot, but you can’t eat indoors. Get the shot but stay in the bunker. Get vaccinated but you still can’t travel. What’s the point of getting vaccinated? These experts are aces at torpedoing their own narrative. Luckily, tens of millions of Americans have ignored the experts and are lining up for the vaccine, which is safe and effective. Yet, Fauci also hints at his vaccine-only approach to herd immunity. He forgets that scores of Americans have acquired natural immunity and coupled with the rate of vaccinations—we’re probably near herd immunity right now. You also have to toss in the tens of millions of kids who overall don’t contract or spread the virus. Dr. Marty Makary of Johns Hopkins has written multiple op-eds about herd immunity, COVID, and how the CDC guidelines, especially on vaccines, appear to be frozen by fear. He’s the one who calculated that based on the numbers now—two-thirds of the country probably already had the infection.

Fauci and his advice have become so bad that Bill Maher is doing commentaries ripping the expert community and their media allies for peddling absolute garbage about the virus, noting that Democrats are also miserably misinformed about the pandemic.  The “scared straight” approach has not and will never work here.  Fauci has been doling out some pretty solid science fiction regarding COVID and vaccines. It’s time we do ask these questions of him but ignore his advice. He’s overdrawing on that balance concerning credibility.