Judge: Maxine Waters’ Actions ‘May Result in This Whole Trial Being Overturned’ 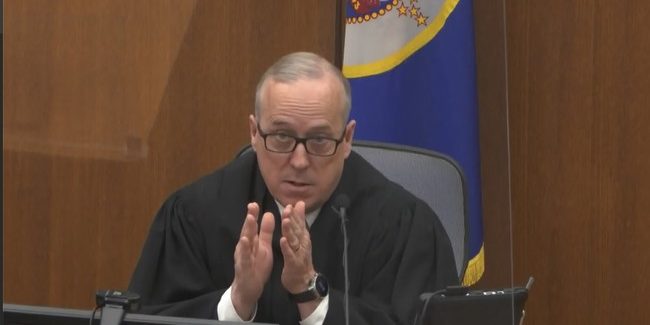 As the jury began deliberations in the trial of Derek Chauvin Monday evening, the former Minneapolis police officer’s legal team raised several concerns with the judge over outside influence impacting the jurors judgement.

Chauvin’s lawyers pointed out that jurors were not sequestered during the case and therefore may not be free from outside influence in the form of news updates they may have inadvertently or purposefully seen along with ongoing violence in the community surrounding the Chauvin trial and approaching verdict. Among their concerns,  Chauvin’s defense team pointed to Rep. Maxine Waters (D-CA) and her appearance with demonstrators in Brooklyn Center, Minnesota, over the weekend.

Even though the judge denied the defense’s motion for mistrial, he highlighted the damage her rhetoric may have done, saying “Congresswoman Waters may have given you something on appeal that may result in this whole trial being overturned.”

The judge continued with a scorching message for Rep. Waters and other elected officials who have engaged in what he slams as “abhorrent” behavior disrespecting the rule of law and giving their opinion in a way that is inconsistent with their oath to the Constitution:

I’m aware of the media reports. I’m aware that Congresswoman Waters was talking specifically about this trial and about the unacceptability of anything less than a murder conviction and talking about being confrontational, but can you submit the press articles about that.

This goes back to what I’ve been saying from the beginning. I wish elected officials would stop talking about this case, especially in a manner that is disrespectful to the rule of law and to the judicial branch and our function.

I think if they want to give their opinions, they should do so in a respectful and in a manner that is consistent with their oath to the Constitution, to respect the co-equal branch of government.

Their failure to do so I think is abhorrent, but I don’t think it’s prejudiced us with additional material that would prejudice this jury. They have been told not to watch the news. I trust they are following those instructions and that there is not in any way a prejudice to the defendant beyond the articles that were talking specifically about the facts of this case.

A congresswoman’s opinion really doesn’t matter a whole lot. Anyway, so, motion for mistrial is denied.

Ultimately saying he trusted jurors to follow his instructions to them, the judge denied the defense’s motion for mistrial, adding “a congresswoman’s opinion really doesn’t matter a whole lot.”