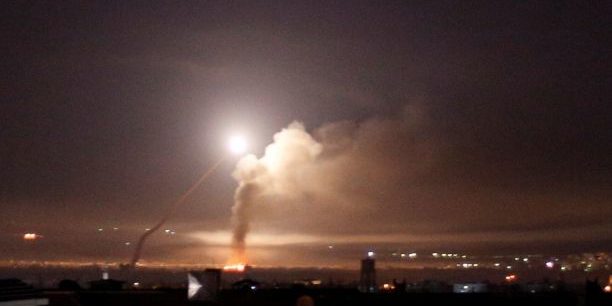 Israel and Iran reached the brink of full-scale war Thursday as the Islamic Republic’s unprovoked rocket attack on soldiers in the Golan Heights gave way to an unprecedented Israeli counter-strike that targeted nearly all Iranian infrastructure inside Syria. The Israeli Defense Force said it deployed fighter jets and used missiles to strike a range of targets, including military compounds, intelligence operations and munitions warehouses, a statement read. The strikes were Israel’s largest air operation in Syria since the 1973 Yom Kippur War.

“The IDF will not allow the Iranian threat to establish itself in Syria. The Syrian regime will be held accountable for everything happening in its territory,” the press release read. “The IDF is prepared for a wide variety of scenarios.”

The missile launcher responsible for the Iranian rocket strikes was also destroyed, according to the release. The strikes came in response to Syria-based Iranian forces firing roughly 20 rockets at Israeli front-line military positions in the Golan Heights. Lt. Col. Jonathan Conricus, an IDF spokesman, called the attack “the most severe attempt” by Iran’s Al Quds force to attack the country. It was the first time Iranian forces have attacked Israel from Syria, according to Reuters.

Conricus said four rockets were intercepted and the others fell short of their targets. No injuries or damage was reported. The White House on Thursday condemned the Iranian assault, two days after President Trump announced he was pulling the U.S. out of the Iran nuke deal. “The United States condemns the Iranian regime’s provocative rocket attack from Syria against Israeli citizens, and we strongly support Israel’s right to act in self-defense,” Press Secretary Sarah Sanders said in a statement. “The Iranian regime’s deployment into Syria of offensive rocket and missile systems aimed at Israel is an unacceptable and highly dangerous development for the entire Middle East.”

Israel’s rockets shook Damascus with the sounds of explosions just before dawn. Syria’s state media said Syrian air defenses intercepted “hostile Israeli missiles” early Thursday that were fired over southwestern Damascus. Hours later, state-run Al-Ikhbariya TV broadcast a live feed of Syrian air defenses firing into the sky above the capital, and loud explosions and air defense firing were heard through the night. The footage could not be independently verified.

The Britain-based Syrian Observatory for Human Rights said the Israeli strikes killed 23 fighters, including five Syrian soldiers. Syria’s military, however, said early Thursday the Israeli strikes killed three people, wounded two and destroyed a radar station and an ammunition warehouse and damaged a number of air defense units. Syrian Brig. Gen. Ali Mayhoub said Syrian air defense systems had intercepted “the large part” of the incoming Israeli strikes. There was no immediate information about Iranian casualties, but Conricus said the main intent was to target hardware rather than personnel. Tensions between Israel and Syria have been on the rise as Iran has sent thousands of troops to back Syrian President Bashar Assad from an insurgency in his country. Israel has warned it will not accept a permanent Iranian military presence in Syria.  Though Israel does not intend to further escalate the situation, Conricus said troops will remain on “very high alert.”

“Should there be another Iranian attack, we will be prepared for it,” he said.