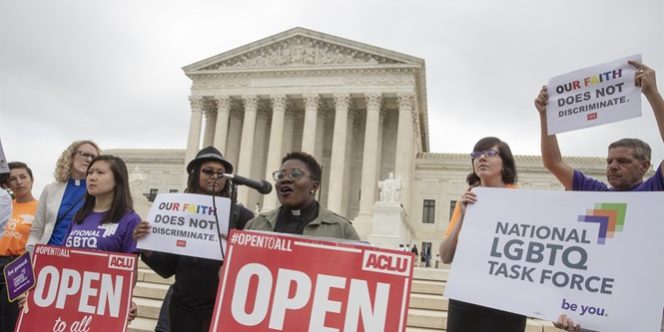 On Monday morning the United States Supreme Court issued its 7-2 decision in the case concerning Jack Phillips, the Christian owner of Masterpiece Cakeshop in Colorado who declined to make a homosexual “wedding” cake.

Some liberal legislators are both denouncing the Court’s decision and calling for the passage of LGBT-related legislation.

In her statement House Minority Leader Nancy Pelosi (D-CA) called for the codification of “sexual orientation” as well as “gender identity” into civil rights legislation:

“Our nation’s story is one of ever-expanding freedoms and progress toward a future of equal, full rights for all,” she stated. “To carry forth that progress, the Congress must immediately move to pass the Equality Act, to remove all doubt that sexual orientation and gender identity warrant fundamental civil rights protections in the workplace and in every place. Democrats will never stop fighting for every American’s right to full equality and equal justice under the law.”

Rep. Barbara Lee (D-CA), a self-described “Progressive Democrat” and “Proud member of the #resistance” tweeted: “SCOTUS today missed an opportunity to reaffirm fundamental civil right protections for #LGBT people. The only way to ensure #LGBT people across the country are protected from the kind of discrimination in Masterpiece is to pass the Equality Act! #OpenToAll”

Rep. David Price (D-NC) tweeted: “I support equal rights for all because I believe in an America that doesn’t discriminate on the basis of sexual orientation. Today’s #MasterpieceCakeshop SCOTUS ruling tells us how much farther we must go in the fight for equal rights. We must pass the #EqualityActNow.”

Rhode Island Rep. Jim Langevin (D) tweeted his disapproval of the Court’s ruling and called for legislation: “Disappointed with the SCOTUS ruling in #Masterpiece today. Though narrow, it highlights the need for national LGBT anti-discrimination laws. We must pass the #EqualityAct and ensure businesses open to the public are #opentoall.”

Rep. Mark Takano of California (D) tweeted: “Today’s ruling in the Masterpiece case was narrow, but that doesn’t make the rising tide of anti-LGBT discrimination any less dangerous. We must pass the #EqualityActNow to ensure that LGBT Americans are never denied service because of who they love or who they are. #OpenToAll”

But not everyone in Congress bemoaned the ruling—some Republican members expressed their satisfaction with the Court’s decision.

In his statement Utah Sen. Mike Lee (R) said that, “The Colorado Civil Rights Commission’s hostility toward the religious beliefs of Mr. Phillips was incompatible with the First Amendment,” and he added that “Today’s decision is a win for our nation’s founding principle that our laws must be applied in a manner that is neutral toward religion.”