McCabe Firing was Recommended by FBI Ethics Office, Based on Nonpartisan IG’s Findings 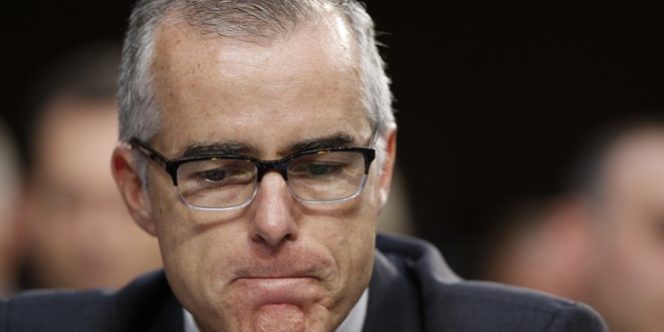 The latest major controversy in DC is following a familiar pattern: A development occurs, then is immediately followed by President Trump reacting poorly, coupled with President Trump’s opposition overreaching with misplaced and conspiratorial claims pertaining to Russia.  In this case, the development is the firing of former FBI Deputy Director Andrew McCabe — who was placed on leave a number of weeks ago due to unspecified misconduct unearthed by the DOJ’s nonpartisan Inspector General.  The question in recent days was whether McCabe’s superiors would terminate him prior to his planned retirement date, thus depriving him of a taxpayer-funded pension.  We got our answer on Friday evening, via this statement from US Attorney General Jeff Sessions:

The FBI’s OPR then reviewed the report and underlying documents and issued a disciplinary proposal recommending the dismissal of Mr. McCabe.  Both the OIG and FBI OPR reports concluded that Mr. McCabe had made an unauthorized disclosure to the news media and lacked candor – including under oath – on multiple occasions. The FBI expects every employee to adhere to the highest standards of honesty, integrity, and accountability.  As the OPR proposal stated, ‘all FBI employees know that lacking candor under oath results in dismissal and that our integrity is our brand.’  Pursuant to Department Order 1202, and based on the report of the Inspector General, the findings of the FBI Office of Professional Responsibility, and the recommendation of the Department’s senior career official, I have terminated the employment of Andrew McCabe effective immediately.”

McCabe has since lashed out through media interviews and, ironically, apparent leaks— asserting that his dismissal is part of some Trumpist plot to undermine special counsel Robert Mueller’s Russia investigation.  There is no doubt that the president’s public football-spiking over McCabe’s sacking is unseemly and unpresidential.  It has also become clear that the president and his attorneys are once again itching for Mueller’s probe to end, resulting in ill-advised, desperate-sounding and guilty-lookingstatements.  Mueller has a superb reputation and inherited an investigation that was initiated not by the feds’ divisive and potentially-tainted surveillance of Carter Page, but by a separate fact pattern (as confirmed even by Congressional Republicans).  He must be allowed to complete his work, even if his close friendship with former FBI Director James Comey and the Democratic tilt of his team are fodder for fair criticism.  That said, the storyline that McCabe’s ouster amounts to an abuse of power, executed for nakedly partisan reasons that foretell dark things to come vis-a-visMueller, strikes me as overwrought, speculative, and hyperbolic.  Let’s review some facts, all of which would exist even if Trump had never fired off a single tweet about McCabe:

(1) McCabe’s firing came as the result of information gleaned by the Justice Department’s nonpartisan Inspector General.  Michael Horowitz was appointed to that position by President Barack Obama and was confirmed by a Democratic Senate.  Not only that, his discovery of McCabe’s apparent wrongdoing (unauthorized media leaking, about which McCabe later “lacked candor” with investigators) came in the context of a sprawling IG examination of the FBI’s handling of various Clinton-related scandals and investigations in the run-up to the 2016 election.  That investigation was demanded by Democrats, who cheered its announcement (McCabe’s current lawyer even referred to the probe as “welcome news” in a Washington Post op/ed).  Also, when did that soon-to-be-concluded investigation commence?  Early January 2017, before Donald Trump took office.  To recap: McCabe’s fireable misconduct was unearthed by a Democrat-demanded inquiry that was launched during the Obama presidency, led by an Obama-appointed and Democrat-confirmed watchdog.

(2) After the IG discovered what McCabe had done — remember, the current, respected FBI Director immediately ceased defending McCabe upon seeing the evidence, and placed him on terminal leave — those facts were relayed to the Bureau’s nonpartisan Office of Professional Responsibility.  That office is overseen by an official who was originally elevated to her role by…Robert Mueller.  It was OPR, which serves as the FBI’s internal ethics department, that recommended McCabe lose his job due to his actions.  Sessions did not drop the hammer on McCabe out of nowhere; he did so because the ethics office (populated with non-political, career employees) reviewed the independent IG’s findings and rendered a verdict that McCabe should be fired.  Those are crucially important facts.  Relatedly, I’ll add that the American people deserve to see the evidence against McCabe, and the entire IG report, as soon as possible; plus, looking into whether the president’s obnoxious lobbying had an inappropriate impact on the timing of McCabe’s final dismissal is a legitimate line of inquiry, as well.

(3) As part of his pushback, McCabe is arguing that he was not responsible for any unauthorized media leaks — asserting specifically that the press “interaction” in question was discussed with, and approved by, then-Director Comey.  This claim may open up a new can of worms, based on previous sworn testimony by Mr. Comey:

McCabe is accused of misleading investigators about allegedly giving information to a former Wall Street Journal reporter about the investigation of Hillary Clinton and the Clinton family’s charitable foundation. McCabe asserts in his post-firing statement that he not only had authority to “share” that information to the media but did so with the knowledge of “the director.” The FBI director at the time was Comey…If the “interaction” means leaking the information, then McCabe’s statement would seem to directly contradict statements Comey made in a May 2017 congressional hearing. Asked if he had “ever been an anonymous source in news reports about matters relating to the Trump investigation or the Clinton investigation” or whether he had “ever authorized someone else at the FBI to be an anonymous source in news reports about the Trump investigation or the Clinton investigation,” Comey replied “never” and “no.” The Justice Department’s inspector general clearly saw this “interaction” as problematic in seeking answers from McCabe. If the inspector general considered this to be a leak to the media, any approval by Comey would be highly significant.

In his rush to position himself as an anti-Trump martyr, McCabe may have implicated his friend, former boss, and fellow Trump critic as a perjurer.  I’ve been advocating for James Comey to return to Capitol Hill and offer additional testimony under oath for months.  This wrinkle raises even more serious questions that require answers.  I’ll leave you with this observation, followed by my response to a quasi-defense of McCabe:

The Left frequently accuses Trump of undermining the independence and legitimacy of Robert Mueller’s work, yet that’s exactly what many Trump critics are doing with the Inspector General’s determinations, in furtherance of their own political narrative.  One does not justify the other.