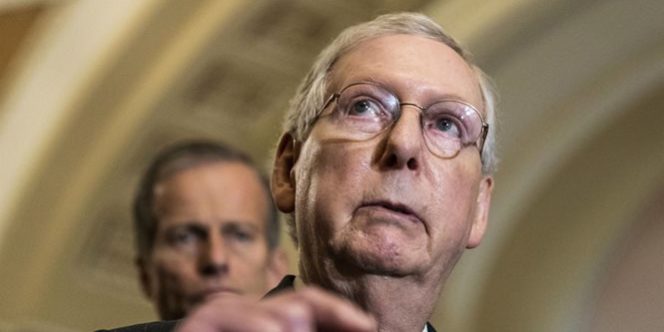 A lot has been going on, so things fall through the cracks, but you have to re-up anytime “Cocaine Mitch” throws down the hammer on Democrats. The Left wants this election reform bill signed into law. It has no chance in hell, but they’re pushing for it. They have been since January. It supposedly aimed at fighting corruption and bringing more transparency to government and the election process. Rep. Dan Crenshaw (R-TX) blasted the bill, saying it could legalize the type of shady election tactics that have revoked the election results of North Carolina’s eighth congressional district over fraud allegations. Last Friday, House Democrats passed this bill, known as H.R. 1. Still, Senate Majority Leader Mitch McConnell said he plans to hold a vote on the Green New Deal. When asked why Mitch has a simple answer: he gets to call the shots (via The Hill):

McConnell reiterated his position when pressed about why he has only pledged to bring the progressive Green New Deal to the floor for a vote and not the election reform bill.

“Because I get to decide what we vote on,” McConnell quipped.

“This sprawling 622-page doorstop is never going to become law. I certainly don’t plan to even bring it to the floor here in the Senate,” McConnell said of the legislation Monday.

Senate Minority Leader Charles Schumer (D-N.Y.) has criticized McConnell’s motives, arguing that his plan to force a vote on the progressive proposal is a “diversion” from having a debate on climate change.

Also, the American Civil Liberties Union is against it, so that’s all you really need to know about the Democrats’ bill. It’s trash. The organization announced its opposition last week (via AP):

The American Civil Liberties Union dealt a blow Monday to Democrats’ new election overhaul legislation, saying the bill does too much damage to the First Amendment and the storied rights group cannot support it.

ACLU officials said they support parts of the bill, such as making it easier to register to vote, but said the legislation attempts to control even the mere mention of a politician, which goes too far.

“They will have the effect of harming our public discourse by silencing necessary voices that would otherwise speak out about the public issues of the day,” the ACLU’s national political director and senior legislative counsel wrote in a 13-page letter announcing opposition.

Cocaine Mitch has once again said, “thanks for playing” to the Democrats.